The Singapore Formula One Grand Prix has been cancelled for the second year in a row due to the COVID-19 pandemic, race organisers said in a statement on Friday.

The night race at the Marina Bay circuit had been scheduled for October 1-3 but immigration restrictions in relation to coronavirus means it will not go ahead. 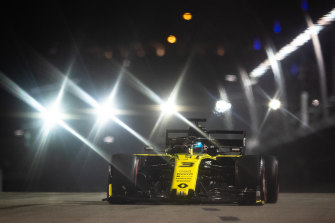 Organisers have cancelled the Singapore Grand Prix for a second consecutive year.Credit:Getty Images

Singapore follows Canada off the calendar and is unlikely to be the last to fall victim of the pandemic with Japan, Brazil, Mexico and Australia all looking uncertain from the original list of 23 rounds.

Australia has already been rescheduled to November but travel is heavily restricted. The Australian Grand Prix is due to run two weeks after the Brazil round, with the South American nation one of the hardest hit by the virus in the world.

“To cancel the event for a second year is an incredibly difficult decision, but a necessary one in light of the prevailing restrictions for live events in Singapore,” said Colin Syn, deputy chairman of Singapore GP Pte Ltd.

“We would not be able to deliver a full event experience fans have come to expect over the years, while safeguarding the health and safety of our fans, contractors, volunteers and staff.”

The race attracts tens of thousands of fans from around the world, with concerts and other entertainment around the sidelines. Tickets for this year’s race had yet to go on sale.

The BBC and Sky television had earlier reported the Singapore race was off.

A Formula One spokesman said the sport had alternatives to fill the gap.

“We continue to work with all promoters during this fluid time and have plenty of options to adapt if needed,” he said.

Turkey, which had been due to replace Canada but was then also scrapped, would be a possible stand-in with talk also of China making a return and a second potential race in the United States.

Austin, Texas, is due to host the US Grand Prix in late October but could step up with a double-header although there has also been speculation that Indianapolis is under consideration.

That might appeal to the sport’s US-based commercial rights holders Liberty Media.

Formula One faces a separate challenge with the Dutch authorities telling Formula One that all working staff attending the race at Zandvoort in September must be vaccinated against COVID-19.