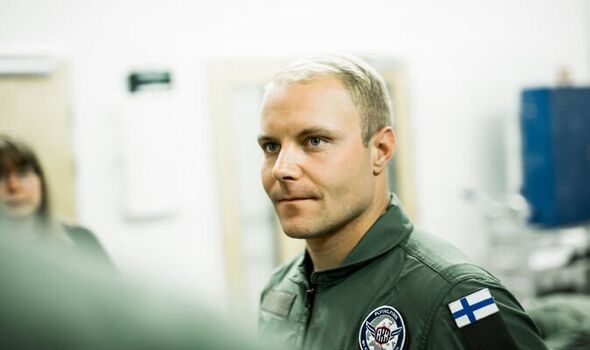 Valtteri Bottas has said time in the Finnish army turned him from a boy into a man and was a “kind of transition”. He was called up for mandatory military service between 2008 and 2009, earning the military rank of lance corporal.

Bottas said he learned “resilience” and “teamwork” after his time away and also appreciated the “small things in life”.

Speaking to People.com, he explained: “Looking back at it, it was actually fun. But for sure, sometimes when I was there, it was not so much fun. Like when you’re tired and sleeping in the freezing cold forest for two weeks.

“But to me, it makes a boy a man. That is kind of the transition for many people and to me, it did exactly that. You definitely learn resilience. You learn a lot about teamwork. Because you need to work as a team when you’re in extreme conditions or situations.

“You learn self-discipline for sure. And respect, in a way, for everything. That time also made the small things in life feel more serious. Like having a warm and soft bed after some of the camps was a luxury.”

Bottas’ conscription came just months after he won the Formula Renault Eurocup and Formula Renault Northern European Cup in 2018. Months later he was competing in Formula Three Euro Series before signing for Williams as a test driver in the following season.

He made his race debut at Williams in 2013 before replacing Nico Rosberg when he quit Mercedes after the 2016 season. Bottas is enjoying renewed joy in 2022 after switching from Mercedes to Alfa Romeo for the new season.

As well as security with a multi-year deal, Alfa Romeo’s Ferrari powertrain has catapulted them up the grid. The Finn scored good points with a sixth-place finish in Bahrain but retired in Saudi Arabia despite running in the top 10.

After the race, Bottas said: “The engine temperatures kept rising, we need to investigate what caused that, but we had to pull the car out as we didn’t want to lose the engine. It’s how racing goes, we now need to make sure we solve whatever issue it was and move on. Looking at the positives, the car is really good.

“We made another step forward from the previous race, even in the starts. We were doing a good job and enjoying some close battles: now let’s make sure we get back to scoring in Australia.”

The Notebook: Ted Kravitz with all the F1 news as return date is set