Richmond president Peggy O’Neal believes it is “a bit ambitious” to think the AFL season would resume in July.

The league was shut down almost a month ago due to the coronavirus pandemic, with just one round of matches completed. 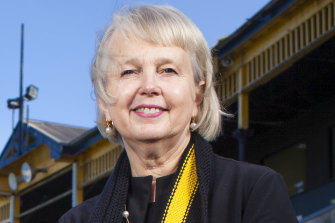 “Hubs is very much what people are talking about but I’d like to see the detail of how it’s going to work, because we’re responsible for the wellbeing of our staff and our players.”

Despite the strong speculation, AFL chief executive Gillon McLachlan admitted on Friday that he still wasn’t sure if hubs would be used.

“I don’t know where we’ll land on that, there’s a range of options,” McLachlan told 3AW.

“But I do feel hubs like that means different things to different people and it can be applied differently, people have talked about remote islands and different stuff.

“In its simplest form, though, [it means] enhanced quarantine measures for our [players] if and when we get back on the park, and I’m more confident it’s when, as is appropriate and people would expect.”

McLachlan agreed footy would look different when it eventually resumed due to the huge financial hit the game has taken, but the AFL chief was confident it wouldn’t be a lesser spectacle.

“The opportunity here is to be more efficient, to look for structures that have been challenged because there are going to be things that have to be changed,” he said.

“But I do feel we’re going to come out of this, and from the community level to the elite, the core of what we love about our game will be the same and hopefully there’ll be things that are better.”