South Sydney coach Wayne Bennett labelled Des Hasler’s perfect preliminary finals record as a “myth” as the battle between the veteran coaches heats up ahead of Friday night’s do-or-die clash.

Hasler has never lost a preliminary final as either a coach or player. The Manly coach said he was unaware of the statistic but said it was “comforting” going into Friday night’s game at Suncorp Stadium.

“We’ve probably had a couple of those [tight] games and it is probably just a situation that arises,” Hasler said of his eight straight successes in grand final qualifiers.

“I don’t think there is any one script, and it is a matter of turning up and putting your best performance forward. That is all you can really do in prelim finals. They are like that.

“It’s an important mentality, all players and every part of the coaching faculty knows that it’s do-or-die, and that’s what makes this time or these particular games so much different to the others.”

But Hasler’s record of five preliminary finals win as a coach and three as a player was not enough to impress Bennett. 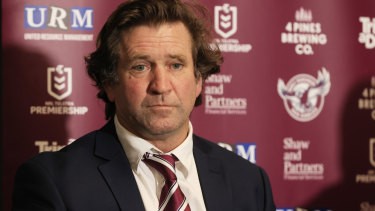 “That’s a bit of a myth stat, that one,” he said. “What about all of the preliminary finals we don’t make as a coach? You just talk about how many you made, what about the ones you didn’t make? That’s a myth statement.”

Another myth to come out of this week was reports of injuries to both Sean Keppie and Brad Parker, with Hasler confirming on Thursday morning they had passed their fitness tests. “They’re all good and ready to go 1-17,” Hasler said of the pair.

As well as keeping Hasler’s prelim streak alive, Manly will also make history if they win Friday nights game to become the third side to lose their first four games of the season and make it to the grand final.

Hasler was quick to praise skipper Daly Cherry-Evans for getting his side so far into the season despite a horror start.

“I’ve always had that view and there is no doubt about the credentials of what Cherry has done,” he said. “He has proven, and he has been tested as one of the best players and leaders in the game and that has been a real focus for him.

“You can just see how much he has grown, the work he does there and how he goes about his business, providing that support and base for the players.”

Injured Panthers trio Brian To’o, Viliame Kikau and Tyrone May are also on track to play in the preliminary final clash against Melbourne after being fit to train on Tuesday. Mitch Kenny will likely be out for the remainder of the season after badly injuring his ankle in last week’s clash against the Eels.

Storm winger Josh Addo-Carr is also set to return from a hamstring injury and confirmed he is running at “95 percent” and will be right for Saturday afternoon.

Trust or bust: Revelations that leave Tigers on collision course with Maguire

Team of the season: Our stand-out XIII from Super League and the NRL in 2020