It was absolute pandemonium. In the stuff of which dreams are made, Noah Anderson – the second draft pick of 2019 – split the goals after the siren to cap the game of his life, and steal the most improbable of victories over Richmond.

Richmond had looked the better side all night and had held a 40-point lead early in the third quarter. But they missed a series of golden opportunities, as the Suns climbed all over them late with a six goal to one final term- including two majors in the final 90 seconds. 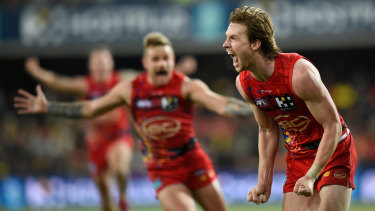 Noah Anderson kicks a goal after the siren.Credit:AFL Photos

There were heroes and villains on both sides. Jason Castagna should have put the Suns away once and for all late in the last quarter as he ran into an open goal square, only for Charlie Ballard to come from nowhere to make the smother.

Shortly afterwards, Mabior Chol swooped for his third goal with two minutes to go, before Sam Day – marking on the paint of the boundary – squared the ball inside to Anderson for the winner to keep the Suns’ slim finals hopes alive. The Tigers slumped to the turf. 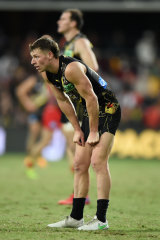 Co-captain Touk Miller was inspirational for the Suns, with 13 clearances on top of 27 possessions. Ben Ainsworth was another to play perhaps his best game for the club, with two goals and 14 marks in a hard-running performance.

Earlier, Shai Bolton had had the ball on a string for Richmond, and was the most dynamic and dangerous player of the match. But he, too, missed opportunities to win the game for the Tigers, with three behinds to go with his three goals and 29 possessions.

Richmond was rocked early in the first quarter when Tom Lynch went off with a hamstring injury, which he described at half-time as minor and “more annoying than anything”. It didn’t slow the Tigers’ momentum, as they began to race away with the game.

Bolton, in the absence of Dustin Martin, was running rings around his opponents, whether from the centre or in attack – hitting a forward stoppage at top pace for his second goal, taking a ridiculous one-handed mark for a third.

The Suns picked a bad time to turn in perhaps their worst half of football for the year. Sean Lemmens was one (of several) who will not enjoy the review of this game; eventually pressure forward Nick Holman was sent back to stiffen the defence.

At half-time, with the Suns 34 points down and their season well and truly on the line, co-captain Jarrod Witts called his troops in for a chat, clearly looking for a response. He and Miller have all but carried this team on their backs for too long.

But less than two minutes into the second half, Jack Graham strolled away from another stoppage and snapped from 40 metres, for a 40-point lead. And that should have been the game, if not the end of the resistance.

But whatever Witts said, he got a response. The Suns began to dominate around the clearances, drawing back to within 20 points with four goals for the quarter, Ainsworth and Miller both getting some reward on the scoreboard for their efforts.

Richmond were able to wrest back some control, the Suns lost a bit of their nerve, and Bolton passed off to Riewoldt late in the quarter to restore a 28-point margin; enough, surely, to hold the Suns out.

The pattern repeated in the last quarter: Anderson brought the Suns back within 15 points, only to see Riewoldt given a free run at the ball to mark, then kick his third – a clutch shot from hard up against the boundary.

But the Suns came from the clouds from there, kicking four goals to sneak home, leaving Richmond to count their losses. As good as it was from the Suns, it was a bitter loss for the Tigers – a squandered opportunity they may bitterly rue come September.