Football wasn’t always Oliver Henry’s top priority. But after his brother Jack became a staple in Geelong’s line-up in 2018, he was destined to follow in his sibling’s footsteps.

From athletics, to the Geelong Falcons, to COVID-19 and then to draft night, the journey of Collingwood’s latest sensation wasn’t a linear one, but his rapid rise has not surprised those who saw him in the flesh during the early days. 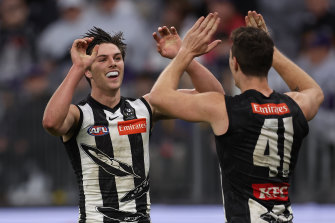 On draft night the Cats had strong interest in reuniting Henry with his brother, according to the Geelong’s former talent ID manager Troy Selwood, while former talent manager of the Falcons Mick Turner likened the teenager’s versatility and aerial prowess to that of Jeremy Howe.

As fate would have it, he ended up teammates with the high-flyer in the black and white, snared with the pick Collingwood received in the Adam Treloar trade.

Since making his debut, he’s played 18 games under three coaches – three under Nathan Buckley, the last seven of 2021 consecutively under Robert Harvey, and then eight of 11 possible matches under Craig McRae in 2022.

He returned from three matches in the VFL (where he kicked 12 goals, including seven against Coburg) to kick two goals against Richmond in round eight, and then took five marks inside 50 against the Bulldogs but sprayed 0.3, leading to him being dropped and then selected as the medi-sub against Fremantle.

But he’s taken his chance since, kicking four goals in three quarters against the Dockers, before another three goals against Carlton in Sunday’s thriller to announce himself as a match-winner.

Track and field runs in the Henry family blood. His mother Karen was a former state sprinter, while father Brendan was a decathlete, and that athleticism flowed to their three boys – Tom, Jack and Oliver.

Tom represented Australia in high jump at junior level, while Jack placed in a national under-18s decathlon event, only making the decision in the lead-up to year 12 that he would pursue football. 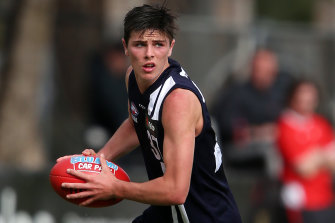 “He got going as a 16-year-old, and he was lucky in some respects because in 2019 we had a pretty ordinary side at the Falcons,” Turner said.

“Our 19 and 18-year-olds weren’t that good, and probably two months out from the end of the season, we had a really good 17-year-old group which included him, and I was very keen to get as many games into those kids as I could before the next year.

“He was a star for us as a 17-year-old. We played him on the wing, half-back flank, forward like he is now, and he kicked a lot of goals, pretty much like he’s doing for Collingwood at the moment.

Henry booted 18 goals in 15 games that season – 12 coming in three consecutive games – and that was despite playing at both ends of the ground.

2020 was supposed to be the season Henry showcased his wares to recruiters and made it clearer whether he warranted a first-round selection in the draft.

Selwood said Henry “had his moments” as a 17-year-old, but was seen as “a bit of an enigma”, a player who could star in 10-to-15-minute bursts, then go missing.

But a trial game at Deakin Uni for the Falcons, against the Western Jets, reminded recruiters of his potential.

“I still remember it vividly, and he just exploded,” Selwood said. “To be honest, he played like a No.1 draft pick in that game.

“He absolutely tore the game apart, and luckily enough for all recruiters, that trial game was filmed because there wasn’t much other NAB League to be watching [that year].

“It just reminded everybody what Henry, when he was on and it was starting to come together, what he could be capable of, which was a difference-maker and a game-breaker.

“It still sticks in everyone’s mind as to how dominant he was. It actually borderline ruined the game because he was going that well.”

One trial game later, the season was shut down due to COVID-19. Selwood believes that if Henry had played a full season, he could have gone as high as pick five.

A month out from draft night, Geelong had picks 13, 15 and 20, and Henry looked likely to end up at the Cats. But after the Giants played hardball on the Jeremy Cameron trade, the Cats went into the draft without a first-round pick.

So, the Cats devised a plan to get back into the draft by trading their 2021 first-round selection.

“As that draft was playing out, the two [players] that we were prepared to do it for were Ollie and Max Holmes, but we sort of knew the only club that were willing to trade their first-round pick [17] for a future was Richmond,” Selwood said.

Collingwood, meanwhile, had two first-round selections – pick 14, received from the Western Bulldogs as part of the Treloar deal, and 16.

But as the night went on, both Collingwood and Richmond’s picks were pushed down the order. The Bulldogs matched a bid at pick one for Jamarra Ugle-Hagan, Sydney matched Hawthorn’s bid at pick five for their academy player Braeden Campbell, and then the Magpies bid on Lachie Jones at 16, which was matched by Port Adelaide.

Collingwood then took the Henry-Holmes decision out of the Cats’ hands, taking Henry at 17, along with Finlay Macrae at 19, and then at pick 20, the Cats agreed to trade their future first-round pick to Richmond to snare Holmes. 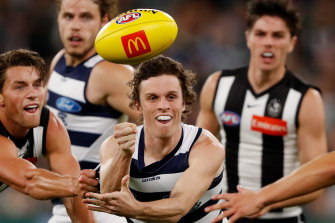 The Cats wanted one of Max Holmes (centre) or Oliver Henry (right).Credit:Getty Images

From draftee to rising star

“Raw” is probably the word that best described Henry when he arrived at Collingwood, but his talent was evident, so much so Buckley picked him for round one last year.

But he was dropped after round one, returned to the side for eight and nine, and then dropped again.

“We could see the talent and what he could do on the track, and he’s been dropped this year as well,” Buckley said on SEN this week.

But Turner said there was never any doubt in his mind that Henry would make the grade. 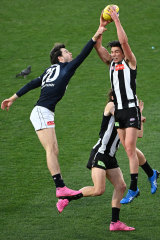 “He’s starting to do the things we saw him do as a 17-year-old at the Falcons,” Turner said.

“He’s a level-headed kid, and he’s an absolute star in the making, there’s no doubt about that. That mark he took towards the end when he drifted across the front of the pack, that just shows the athleticism he’s got.”

“As he gets bigger and stronger, he’s only going to get better,” Turner said, adding that the Pies could even play Henry in defence. “He was a fantastic intercept mark and if he didn’t mark it, he had the athleticism to punch the ball away, and then we’d swing him forward, and if I remember correctly, in a game against Dandenong he kicked five and could have kicked more.

“He can play very much like Jeremy Howe. When Jeremy Howe retires, he could even go back and do that.

“He’s got the speed to find space, like he did [against Carlton], in the forward line, and he’s also got the closing speed in the back line.”

‘I need a spell’: Clarkson out of Carlton coaching race