Key Western Bulldogs player Aaron Naughton has a fresh injury worry less than two weeks from round one, with the forward injuring his forearm in his side’s AAMI Community Series match against Melbourne.

Naughton’s outing at Marvel Stadium on Monday was a quiet one, and he played no part in the game after half-time. 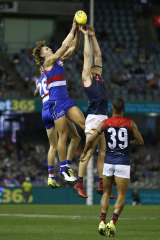 The forward looked sore after what looked like a hit to his forearm in a contest with Christian Petracca of the Demons.

He could be seen in the rooms during the third quarter in a sling.

The 21-year-old missed a series of games in 2020 courtesy of an ankle injury.

Laitham Vandermeer (hip corkie) and Jay Lockhart (testicle) have also left the field injured. The latter has gone to hospital.

Adam Treloar isn’t yet ruled out for round one, despite a calf complaint. He played two-and-a-half quarters in the VFL practice match between Footscray and Casey Demons at Whitten Oval on Monday morning.

He spent most time in the midfield but also floated across half-forward and half-back. The former Collingwood player had 19 touches and six clearances.

Treloar has been running now for two weeks and indicated he could have played more after the game.

Jason Johannisen also played in the VFL practice match, as did Majak Daw, who kicked one goal playing mostly forward.

Daw is fighting for a list spot at the Demons after being de-listed by North Melbourne last season.