Huddersfield: Josh Addo-Carr is on the verge of breaking the record for most tries at a single World Cup after bagging five tries in Australia’s resounding quarter-final victory over Lebanon on Saturday morning.

Australia’s 48-4 win at John Smith’s Stadium in Huddersfield, in which skipper James Tedesco was rested at half-time after picking up a cork, will now see them take on the winner of Sunday morning’s New Zealand-Fiji game in next week’s semi-finals. 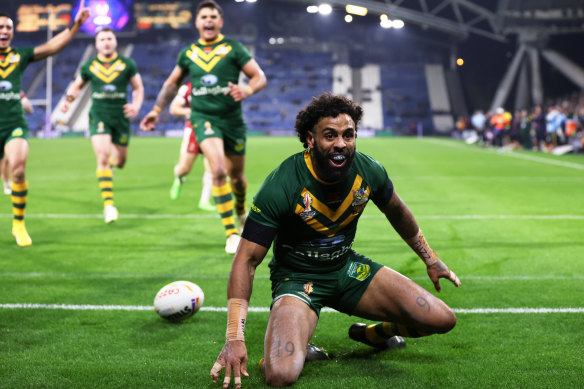 It comes after a record-breaking night for Addo-Carr, who made it 11 tries from three games in this year’s World Cup, including a hat-trick inside 19 minutes on Saturday.

The record for the most tries at a tournament was set by his Kangaroos teammate Valentine Holmes at the 2017 World Cup on home soil.

During the 2017 tournament Holmes also set the record for the most tries in a single match, bagging six in Australia’s semi final victory over Fiji five years ago.

Holmes also scored five tries in a group match against Samoa during the same tournament, a feat Addo-Carr equalled in the comprehensive win over coach Michael Cheika’s Lebanon side.

Addo-Carr’s 11-try haul for the tournament is even more impressive considering he was rested by coach Mal Meninga in their final group game against Italy. He now has two games to surpass Holmes for the World Cup record. 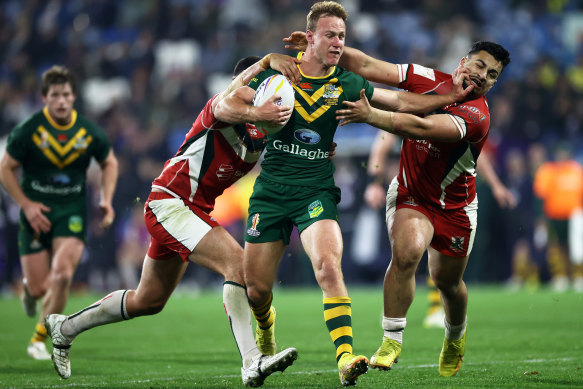 Daly Cherry-Evans fights off Lebanon to help his team to a 48-4 victory.Credit:Getty

Standing in Australia’s way of a World Cup final berth at Manchester United’s Old Trafford is expected to be arch rivals New Zealand, who must first get past Fiji in the quarter-final at Hull on Sunday morning.

Having only days earlier been dubbed the future of Australian rugby league by Kangaroos coach Mal Meninga, halfback Nathan Cleary got off to a nervous start kicking the ball out on the full.

It didn’t seem to bother the Australians, who took just four minutes to open their account courtesy of a diving Addo-Carr in the corner.

Tedesco busted his way through the middle of the Lebanon defence shortly after to set up Addo-Carr’s second of the night.

Addo-Carr collected a hat-trick inside 19 minutes when Cameron Munster pulled off a one-on-one strip before offloading to the Bulldogs winger for his third.

Australia’s success down the left edge continued through Latrell Mitchell, who barnstormed his way over three Lebanon defenders to give Australia an 18-0 advantage.

Cleary, who missed three of his first four attempts at goal, wasn’t having such difficulties with his passing as he put Angus Crichton through a yawning gap to gift Cameron Murray a four-pointer.

The South Sydney captain made it a double a few minutes later, capitalising on Harry Grant’s creativity from dummy half to duck his way under the Lebanon forwards for his second of the night.

Trailing 30-0 at the break, things didn’t get much better for Lebanon in the second half with Josh Mansour spilling a sloppy pass to gift Addo-Carr his fourth try of the night.

The off-contract winger redeemed hismelf a few minutes later when he latched on to a Mitchell Moses grubber to score Lebanon’s first points of the night.

Addo-Carr then collected his fifth, diving on a Munster grubber to finish with the second most tries in a single World Cup game. Liam Martin dived over late to cap off Australia’s night.

How each AFL club fared during trade period