The inconsistent Cats are searching for back-to-back wins for the first time since Round 4, having gone win-loss for the past seven rounds.

It’s been 14 months since these two sides last played each other, and it was a joyous occasion for Adelaide who stunned the Cats by 12 points in Round 1 last year at Adelaide Oval.

Geelong’s recent form at their Kardinia Park fortress has been patchy, splitting their last six games there 3-3 after winning 41 of their previous 46 games at the venue.

Meanwhile, after starting the year in positive fashion with a 3-3 scoreline, the Crows are now desperate to stop the bleeding, having lost their last four games by an average of 41 points.

And it’s going to be a tough ask for them considering they’ve lost their last 11 games at Kardinia Park. Their last win there came 19 years ago.

Both teams will be down a superstar today with Paddy Dangerfield (Geelong) and Taylor Walker (Adelaide) out due to a calf injury and COVID protocols respectively. 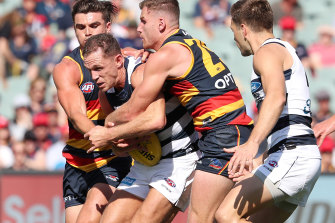 Joel Selwood tries to get through Ben Keays and Rory Laird.Credit:Getty Images

Where’s the ceiling on Bailey? 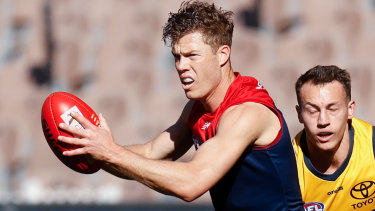 Hello and welcome to our rolling live AFL Saturday mega blog for Round 11.

And what a chock-a-block day full of action it promises to be.

To kick things off we head down the highway as Geelong take on Adelaide at Kardinia Park, while up north at the same time, the Brisbane Lions host GWS at the Gabba.

The twilight game is the match of the round, a top-four blockbuster between the undefeated Demons and the much-improved Dockers at the MCG. 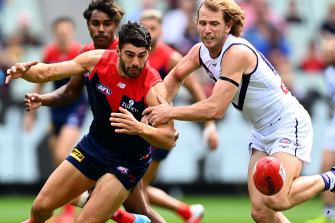 Mitchell’s anger at suggestion he is white-anting Clarkson