All AFL teams will remain in their home states for the final pre-season practice matches to minimise travel and any coronavirus risks.

Only one AAMI Community Series game involving Victorian teams – North Melbourne v Hawthorn, which had been scheduled for Launceston – has been shifted to Melbourne and will be played at North’s Arden St ground on Saturday, March 6. 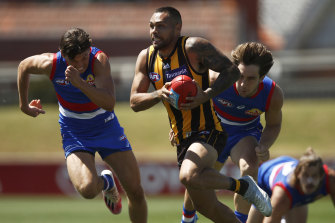 Jarman Impey during the Hawks’ pre-season win over the Bulldogs on Wednesday. Credit:Getty Images

But the non-Victorian teams will all play their cross-town rivals for consecutive weeks as a result of the change, with Adelaide playing Port Adelaide (Flinders University Stadium), GWS taking on the Swans (Giants Stadium) and West Coast facing Fremantle (Optus Stadium). Those three games are all being played on Saturday. Gold Coast and the Brisbane Lions will play one another at Metricon Stadium late Monday.

The AFL took the view that it did not want teams to travel and was mindful of the risks if borders were to shut and teams were required to quarantine, or if there was any outbreak.

By staying in their home states, those risks are greatly reduced with the AFL playing only one proper full-scale, pre-season round before the season proper kicks off on Thursday, March 18, with Carlton to face Richmond.

While AFLW teams are still travelling the league’s view was that it did not want teams to travel unnecessarily when there was no premiership points on the line.