A few weeks ago, Brumbies captain Allan Alaalatoa was told to move out of his house.

It wasn’t a call from a landlord but his bosses at the Brumbies, who told the Wallabies prop he needed to pack his bags and relocate. 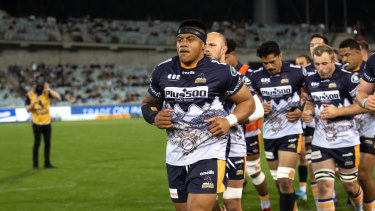 The reason? Alaalatoa was living – by a very short distance – in NSW rather than the ACT.

Despite being just a couple of kilometres out of the ACT in Wallaroo, Alaalatoa’s NSW postal address meant he would be barred from playing in Perth against the Western Force next week in the Super Rugby opener. Teammates Ryan and Lachlan Lonergan were in the same boat, and also moved.

WA has travel restrictions in place for NSW residents due to COVID-19, and although Wallaroo is a sparsely populated rural area just over the border, there was no exemption for one of Australian rugby’s biggest names.

Alaalatoa’s swift move sums up the fluid nature of professional sport in 2021. The Brumbies and Waratahs were supposed to play a trial match in Bowral on January 30, but that was cancelled because of WA border policies.

Given the Brumbies were set to be in contact with NSW players, WA restrictions meant Force stars would have to quarantine on their return to Perth, following a trial initially set for last Saturday.

The trial is now set for Tuesday at Viking Park, but the Brumbies had to ensure none of their players had been in NSW two weeks before facing the West Australians in their only proper hit-out before Super Rugby AU kicks off.

It didn’t matter whether he was two or 200km away, Alaalatoa had to move into temporary accommodation the Brumbies have paid for. He will live there for more than a month until the Brumbies return from Perth after round one.

The same goes for the Lonergan brothers, who are sharing an apartment in Kingston after moving from Williamsdale.

“You’ve got to do what you’ve got to do,” Brumbies boss Phil Thomson said. “There was no issue. The boys understood what we had to do. We had to be proactive and think forward and look at those scenarios.

‘The boys understood what we had to do. We had to be proactive and think forward and look at those scenarios.’

“Last year everyone was hit right between the eyes. This year at least we’ve had an opportunity to plan for different scenarios and that’s what Rugby Australia and all the Super Rugby clubs have been doing.”

Under current restrictions, the Brumbies are the only team that can travel in and out of Perth without a fly-in, fly-out exemption or having to quarantine.

The shifting restrictions of state governments, particularly in WA and Queensland, has left rugby officials on edge given a positive COVID-19 case can send a whole city into lockdown.

The WA government won’t consider entry without exemptions unless the other state involved goes 28 days without a positive community transmission.

However, the COVID-19 case recorded in Wollongong on Sunday showed how headaches can emerge when just one new case of transmission is announced.

The Force are set to play the Waratahs in Sydney on March 5 but there is a chance they’d need to quarantine when they return to Perth.

For a team that lived on the road last season, it is far from ideal to do the same again.

“As we saw last week [when parts of WA went into lockdown], things can change pretty quickly, but looking forward to February 19 playing at home,” Force coach Tim Sampson said.

RA hopes restrictions will be eased by the time the Rebels travel to Perth in round four but things can change quickly.

Even players at rival teams have to approach day-to-day life more cautiously than the general population to ensure they earn WA government approval to enter the state.

If another case emerges in WA, the Force may have to relocate to the east coast.

“We don’t go down that path [of discussing hypotheticals],” Sampson said. “There’s too many other things we’ve got to deal with. We’ve got to control what we can control in our backyard.”

The Waratahs, who line up against the Reds on the same opening Friday night, were initially expecting to fly in and out of Brisbane on the same day but may now arrive next Thursday and have a more 2019-style preparation compared to 2020.

There is a degree of flexibility about the draw in terms of location and rugby officials have drawn up contingency plans but they know it is too early to declare what will happen when the situation could change overnight.