The Wallabies can breathe a sigh of relief after New Zealand No.8 Ardie Savea was ruled out for Saturday's Bledisloe match, when the men in gold will look to reverse a horrible record at ANZ Stadium.

The All Blacks, with a spring in their step after a 27-7 victory at Eden Park, arrived in Sydney on Sunday and will be quietly confident of wrapping up an 18th straight Bledisloe Cup series win in the third of four matches between the sides this year. 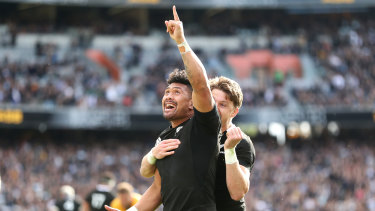 Ardie Savea celebrates scoring a try in Auckland against Australia in his side’s 27-7 victory. Credit:Getty

However, they’ll have to do it without Savea, who has been one of the All Blacks' most dangerous players on both sides of the ball.

Coach Ian Foster confirmed Savea would remain in New Zealand temporarily for the early part of the week to be with his partner after the birth of their second child.

“Ardie's baby boy has arrived, so he'll be joining us late this week,” said Foster, who expected the back-rower to be back for the next Test in Brisbane on November 7.

Savea has been ultra-physical in the opening two Tests of the series and his defensive work at the breakdown led to a number of crucial penalties that got the side out of jail on their own line.

We want to create that atmosphere heading into the game there, make it something that people look forward to.

His try in Auckland, where he decided to run through Filipo Daugunu despite having four men outside him waiting for the ball, typified his desire to assert physical dominance.

Blues No.8 Hoskins Sotutu, who came off the bench in games one and two, has been touted as Savea's replacement to partner Sam Cane and Shannon Frizell in the All Blacks back row.

Meanwhile, the Wallabies enjoyed a rest day on Sunday after a number of bruising sessions and there is already a different feeling about this Sydney Test week.

Australia will base themselves in the Hunter Valley until Thursday, rather than in Sydney, before travelling down for a captain’s run at ANZ Stadium on Friday. 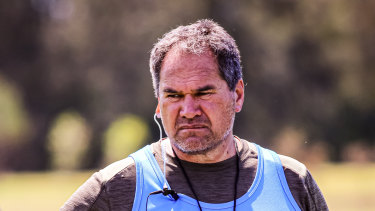 In previous years, the Wallabies’ first Test outing after Super Rugby has usually been against New Zealand at ANZ Stadium. Australian supporters may have deliberately wiped those results from their conscience.

But with two intense hit-outs under their belts, including an impressive draw in Wellington, the Wallabies may be more battle-hardened for Dave Rennie’s first Test in charge on Australian soil.

“It’s just great to be home, in front of our fans. We're looking forward to creating a good buzz,” Wallabies prop Scott Sio said. “We want to create that atmosphere heading into the game there, make it something that people look forward to.

"People always get up for a Wallabies and All Blacks game. It’s the person that doesn’t necessarily watch rugby that we want to encourage to get out there and be a part of it and just enjoy the whole experience.”

Since 2010, the Wallabies have played at 12 venues across the country and their worst record is at ANZ Stadium. They have won two and drawn one of their 12 Tests at Olympic Park over the past 10 years.

The two victories came against South Africa in 2011 and then before the 2015 World Cup when Australia knocked off the All Blacks 27-19.

Australia’s record over the same period at the Sydney Football Stadium, which is being rebuilt, isn’t great either, with two wins from five starts.

The Wallabies have not lost in the past decade at Gio Stadium (two Tests), Optus Stadium (one Test), Subiaco Oval (four Tests) and Bankwest Stadium (one Test), but their happiest hunting ground is at Suncorp Stadium, where they have a 71 per cent win rate (12 wins, four losses, one draw).

Sneaking a win in Sydney would send the series to a decider in Brisbane. It would also set up a dream scenario for Rugby Australia by avoiding a Bledisloe dead rubber.

“We need to grow, we need to get stronger, we need to be better and we’re looking forward to putting in a good performance come Saturday next week,” Sio said.