DON’T MISS A MOMENT OF THE ACTION WHEN ROUND ONE BEGINS ON WEDNESDAY. FOLLOW OUR LIVE COVERAGE OF MELBOURNE v WESTERN BULLDOGS FROM 6PM AEDT.

Western Bulldogs captain Marcus Bontempelli admits some teammates were upset by Melbourne’s provocative premiership rendition of the song the Dogs adopted during last year’s finals series, and it would fuel a new rivalry that will continue in Wednesday night’s grand final rematch.

The opening match of the AFL season pits the Demons, returning to their spiritual MCG home, against the Dogs, the team they defeated to break a 57-year premiership drought in Perth last September.

The Demons linked arms, danced and sang Freed From Desire in the middle of Optus Stadium as they celebrated their premiership triumph.

A video leaked on social media during grand final week, of the Bulldogs players singing the song in the rooms as they celebrated their preliminary final win, at the time annoyed Dogs coach Luke Beveridge, who was disappointed that a private moment had gone public.

Bontempelli said he was not upset by the Demons singing the song, but admitted some players had been. 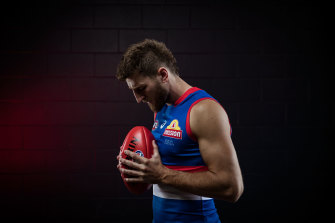 Marcus Bontempelli says the Demons’ celebrations will add fuel to the rivalry in this week’s grand final rematch.Credit:Getty Images

“I think they were just celebrating their first win in a long time and everyone treats that differently. They are free to do what they want, they won [and] we lost, you have to sit there and just cop it because that’s the way it goes,” Bontempelli said.

“I am sure it was the case of others [teammates] being upset by it, but it’s hard to know what’s the game and what is not. It all just feels like it’s the same after losing one.

“It is what it is, there can’t be any more to it. I think it does give a bit of an extra spur to round one.

“There is always more to a game of football, especially when it comes to a rivalry sense, and that mostly happens off the back of most grand finals but especially our two teams.

“I feel like we have had similar rises, similar lists, both broke droughts five years apart. There’s some synergy there between our teams, so there is a natural rivalry about who is going to be better and who is going forward and enjoy the challenge.”

“From all my reports, it’s absolutely been blown out of all proportion,” Pert told 3AW.

Bontempelli said the grand final showed how close his team was to a flag given they led by 19 points midway through the third quarter, and not how far away they were. Melbourne’s goal blitz overturned the lead and blew out to a 74-point Demon victory.

“I still feel like we were close. I think the gap [on the scoreboard] was bigger than it was in reality in retrospect. I didn’t feel we were far off them as a team throughout the course of the season,” Bontempelli said.

“I probably reflect more on the last couple of games of the season that slid us from top four to down to fifth as our biggest opportunity for improvement given a bunch of the other boys had been around the club for seven or eight years now, and we have never finished top four.

“‘Bevo’ has been the same since he has been at the club. We haven’t managed to solidify our second chance and I feel like that slide in the last couple of games of the season really had us trying to get things going in the space of a week, really, for that elimination [final] against Essendon.

“Trying to find and create that momentum and …rebuild some of the confidence we had played a lot of the year with. I look at that more and how we weren’t able to arrest that slide. It came back to bite us in that game.”

Bontempelli said he was determined that the Dogs would not fall away as they did after winning the 2016 premiership, and instead build a dominant era.

”We can’t step away the way we stepped away last time,” he said.

“We were in an extremely different position then. All the players who are still there now who were there then and were 20, 21 were not the players or the mature minds and influences we are now.”

Bontempelli said Beveridge had focused on striking a better balance of fast play and being composed with the ball.

“It’s a maturity and game sense thing we can definitely improve on,” he said.

As for his own form, Bontempelli – he and Norm Smith medallist Christian Petracca were arguably the best two players not only on grand final day but across the season – said he felt in command of his game.

“I am seeing the game as best as I have. I think that naturally happens after six or eight seasons of football. Jackson Macrae, Joshy Dunkley, ‘Libba,’ Adam Treloar, they are having the best seasons of their lives as well and that definitely helps me,” he said. “I certainly feel like I am in a period where I am influencing the game as much as I ever have.”