It came from league Immortal Andrew Johns during the one and only blip in what has been a solid first full NRL season. Ilias was hooked midway through a mid-season game against St George Illawarra, which was South Sydney coach Jason Demetriou’s way of ensuring he didn’t get complacent in the No.7 jersey.

Several league luminaries reached out with messages of support. The one from Johns meant more than he could imagine.

“He told me to keep my head up and play good footy,” Ilias said.

“Coming from [a person] of his calibre, it’s a huge confidence boost. It’s cool, it’s not something you expect. He’s a generational performer so you’re not expecting a message from him on your phone. It’s pretty warming and it’s pretty cool.

“He said to keep my head up and keep doing what I’m doing, which is to back yourself. That’s what the NRL is about, backing yourself. “Everyone is good enough. You have to back your skills and just do it on the field.“ 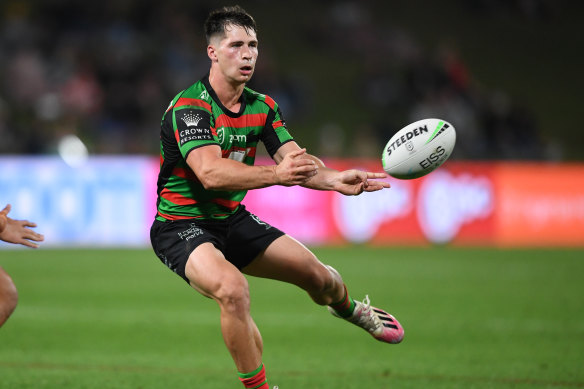 Ilias has done just that. The Rabbitohs have seen enough to extend the rookie playmaker until the end of 2025, a year longer than Adam Reynolds’ contract with Brisbane.

“I’m really happy to have my contract sorted out and I’m even happier to know I’ll be a long-term player with the South Sydney Rabbitohs,” Ilias said.

“I’m really enjoying my first full season of NRL footy with the boys and the coaches, and I know we have more footy to come this year and into the future.

“I’ve won a Jersey Flegg competition with Souths and I’ll be doing everything I can to help us win an NRL premiership too.”

Perhaps the club has been vindicated in its decision to prioritise Ilias over Reynolds?

“I’m not saying anything, it just happened,” Ilias said. “I had nothing to do with the call. I wish the Broncos made the finals, you want to see Reyno play finals. It is what it is. I’m sure he will do a good job for them next year.”

Halves partner Cody Walker has been impressed with Ilias’ maturity in a pressure position.

“I’ve been very vocal in how impressed I’ve been over the year about how he has handled this season,” Walker said. “He’s done a wonderful job, he was thrown into the deep end or whatever it may have been.

“He’s got a fair bit of class, he doesn’t get ahead of himself, he’s quite composed. Nothing worries him.”