Home » Rugby » Andrew Johns: What Nathan Cleary must do in Origin II

The criticism of NSW halfback Nathan Cleary following the loss in Origin I to Queensland can be summed up in one word: Bullshit.

Despite all the things he’s achieved, from premierships to Origin victories, it’s easily forgotten that Nathan is only 24 years old and still learning his trade.

The next phase of his career is understanding how to win when your side is on the backfoot, with everything going against you – as it was in the 16-10 loss to the Maroons last Wednesday night.

That’s the only thing left for him to master.

So how does a halfback do that?

He does it through his kicking game; he drives his forwards; and he balances the team, calling the outside backs to get involved so his forwards can have a spell. 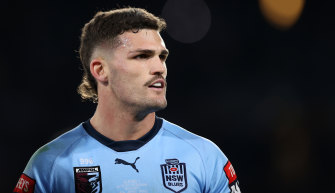 Nathan Cleary will have a point to prove in Origin II in Perth on June 26.Credit:Getty

The Maroons terrorised him when he was kicking. Whether they were offside or not, it doesn’t matter. He needs to get around that because smart teams at this level will always be in his face.

There’s a real feel for the game that comes when you are 26, 27 years old and the game starts to slow down. The problem comes three or four years later because your body starts to break down.

For those four or five years quality halfbacks can really own the result.

A lot of things didn’t go the Blues’ way and Queensland were great, yet Isaah Yeo went within a metre of drawing the match right on full-time.

The big question is whether the Maroons can improve. That’s the challenge for coach Billy Slater if he wants to wrap up the series.

Can Cameron Munster improve? He’s taken his game to a whole new level, which is frightening.

He was certainly helped by the performance of Ben Hunt and Harry Grant out of dummy half.

The best representative teams in which I played featured Danny Buderus and Craig Wing. Both were great at darting out of dummy half, constantly getting at the big forwards with their great footwork and speed.

Hunt and Grant did the same for Munster in Origin I.

I said on The Footy Show on Sunday I thought Storm back-rower Felise Kaufusi should buy a lottery ticket after receiving an $1800 fine for elbowing Roosters halfback Sam Walker in the head.

On Tuesday night, he was cleared of his dangerous-tackle charge at the NRL judiciary.

I’ll give Felise the benefit of the doubt, but I maintain that it didn’t look good. It looked like there were two movements with his elbow in that tackle.

My issue is with the match review committee.

If they fined him, they must have thought he was guilty. And if you elbow someone in the head and bust their nose, that warrants more than a fine.

It has to be one or the other.

The Rabbitohs were good last week against the Titans without being great. They were in third gear most of the game and that was enough against a Titans team that has some real problems.

But Souths’ left side is starting to hum.

Halfback Lachlan Ilias impresses me every week. He’s building his game nicely, organising well and straightening Souths’ attack. That combination with Cody Walker down that left side is building.

I’d just like to see some running in his game. He’s a little pass happy at the moment.

Without doubt, Souths will finish between fourth and eighth come the end of the season.

They’re a couple of pegs down from Melbourne and Penrith, but they showed last year if they can get to the big games, they’ve got players who can lift.

When fullback Latrell Mitchell comes back, I reckon they will catch fire.

As for the Dragons, they were terrible against North Queensland. They were flat and the Cowboys, considering who was out, should have won by more.

They’re physical team that starts matches strongly but fall in a heap as soon as a couple of things go against them.

It will be interesting to see how centre Zac Lomax responds in the face of a lot of criticism.

The Dragons lift at WIN Stadium, so you’d expect some bounce back, but I just can’t see it.

Andy Last: England assistant and Hull FC coach stepping out of the shadows