A South Australian magistrate has revoked a warrant for the arrest of former Melbourne and Port Adelaide player Jack Watts, who is facing charges of driving without due care and failing to report a crash last year.

Watts, 30, did not appear in the Adelaide Magistrates Court on Monday morning where Magistrate Simon Smart revealed a summons had not been served, despite repeated attempts to do so. Watts, a one-time forward, is back living in Melbourne. 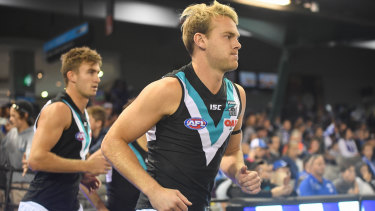 The 2008 No.1 overall draft selection has been charged with failing to stop at a crash scene, failing to give particulars about the crash to a police officer, and driving without due care.

However, on Monday afternoon the court confirmed to The Age that authorities had revoked an arrest warrant for the retired AFL player, coming after his lawyer fronted court and said he had been waiting to receive the summons. A hearing has been adjourned until August 3.

Watts is alleged to have driven a Toyota Kluger into a parked Mazda sedan in the Adelaide suburb of Fulham at about 2pm on September 20 last year and failed to stop and report the incident. There were no injuries from the crash but, four days after the incident, Watts announced he had retired from the AFL after 174 matches.

The court had initially heard on Monday there had been repeated attempts to locate and serve a summons on Watts but these had been unsuccessful.

Watts is currently living in the southern Melbourne suburb of Mentone and is playing for Old Brighton in the Victorian Amateur Football Association.

He found himself in the spotlight in February 2019 when a video emerged of him snorting a white substance off the chest of a woman, but his manager said the substance was legal.

“I have been thinking long and hard about my future for a while and contemplating retirement,” Watts said at the time.

“Since my injury, I feel my body has let me down and I have been struggling with the physical and
mental requirements of getting back to the level of fitness that’s required at AFL level.”