ARL Commission chairman Peter V’landys says the Australian Christian Lobby is wasting its time by trying to pressure the NRL into green-lighting Israel Folau’s return, and should instead focus on combating poverty and inequality.

The ACL this week launched a campaign in support of Folau’s return to the NRL under the hashtag #lethimplay. The advocacy group has started an online petition, took out advertisements and encouraged supporters to go to games with banners and signs. 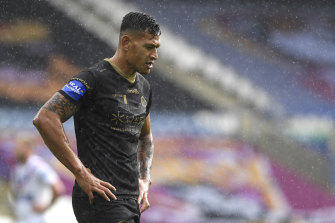 The ACL has launched a campaign in support of an NRL return for Israel Folau.Credit:Getty

The ACL said it was also looking to use TV ads and billboards, after placing a full-page advertisement in The Daily Telegraph on Tuesday.

But V’landys questioned the campaign, saying no NRL club had made an application for Folau to return.

“This Christian Lobby with their full-page ads basically are wasting their resources and money because there is no application,” V’landys told the Herald.

“There are a lot more things in life that they could be lobbying for, like [an end to] poverty and inequality and all those sort of things, rather than this.”

The campaign is being fully funded by the ACL rather than money left from Folau’s GoFundMe page during his legal battle with Rugby Australia, which was refunded to donors.

ACL managing director Martyn Iles said the campaign was launched without Folau’s knowledge. The newspaper advertisement promotes the online petition for his NRL return. It had been signed by almost 13,000 people by Tuesday afternoon.

“The purpose of the ads is to connect more people with the campaign, and anybody who wants to have a say has the opportunity to do so,” Iles said.

In recent months, Folau has signalled a desire to make an NRL return.

The Dragons expressed interest in signing him on a two-year, $1 million deal in January but pulled the pin after a backlash from sponsors. The Broncos were also briefly linked to him.

Any club eager to sign Folau has to put in a formal application to the ARLC to make a case for his return.

V’landys said while campaign supporters were free to protest at games, they were “wasting their breath”.

“I’m the first to promote freedom of speech, they can absolutely express their wishes, but at the moment there is no club who has made an application for Israel Folau,” V’landys said.

“Israel Folau, like every other player, has to follow a process. The process is he has to have a contract with a club and then he has to apply for registration. Neither of those things has been done.”

Folau is contracted to the Catalan Dragons until the end of 2021, but remains in Brisbane with his wife Maria. He was sacked by Rugby Australia in 2019 after making a series of homophobic social media posts.