Australia’s wheelchair rugby team has missed out on a Paralympic medal for the first time since 2004 following a 60-52 loss in their bronze medal match to Japan.

The Steelers’ brilliant reign as the undisputed best team in the world ended abruptly on Sunday following the team’s fourth loss from five starts in Tokyo. 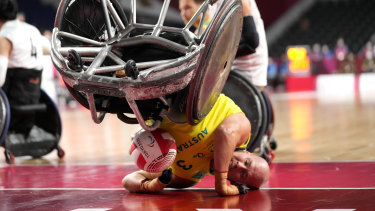 Without any proper games in the past 18 months, competing with far more well-oiled sides was always going to be extremely difficult.

The team won bronze at Beijing 2008 before gold medals in London and Rio but a fourth-placed finish when the team didn’t play to its potential proved tough to take.

“It’s still very raw,” said coach Brad Dubberley, who has been in charge of the team for 15 years. “We’ve had such success for such a long period of time. We know we’re such a better team than the result out there today. We have dealt with chaos and barrier after barrier for so long. Super proud.

“If you said to me a few months ago we’d finish fourth and win one game, I wouldn’t have believed you.”

Captain and five-time Paralympian Ryley Batt admitted he would need some time to consider his future after scoring 27 tries in his final hit-out.

“I was a bit emotional before the game,” Batt said. “Medal or not, we represent our country and it’s something to be very proud of.

“We haven’t been together for so long. It’s really hurt our preparation. I know everyone has been affected but we’ve been really affected. We tried. It just wasn’t to be today.

“Unfortunately teams can’t be at their top forever.”

Asked if retirement was on the cards, the man considered one of the greatest players the world has seen said he would need some time to weigh up his options. 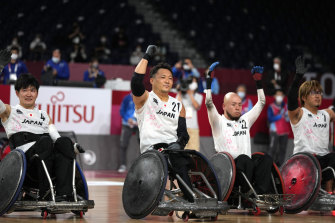 “Doesn’t mean I’m retiring, doesn’t mean I’m not,” Batt said. [I want to] enjoy this moment, have a few beers with the team, and go and be co-captain for the Paralympic team for the next week.

“I’ve definitely got gas left in the tank. Feeling a bit tired at the moment and I know my body can give me more. I need a mental couple of months off. Who knows, we might try to get that medal back in 2024.”

Australia lost to Denmark in their tournament opener and beat France by two tries but fell to Japan in game three.

They managed to sneak into the semi-finals but were no match for the USA in a 49-42 loss before their eight-try defeat to the host nation.

Meanwhile, Australia’s men’s wheelchair basketball side suffered their first loss of the Paralympics – a 66-38 defeat to the USA ahead of a match on Monday against world champions Great Britain.

Captain Shaun Norris said: “We’ve just got to regather, look at some tape and compose ourselves. We know our style of basketball works, we just didn’t play much of it today.”