Check back later in the day for more updates.

Bailey Smith back for Bulldogs, Bruce in line to return

Bailey Smith has completed his AFL suspension while key forward Josh Bruce is in line to return for the Western Bulldogs in Friday night’s pivotal clash against St Kilda at Marvel Stadium.

Smith was suspended for four matches – two for headbutting Geelong’s Zach Tuohy, and another two for conduct unbecoming, having admitted to taking illicit drugs last year when dealing with mental health issues. He has also received a strike under the illicit drugs policy.

“Bailey Smith will play. He will come back into the team,” coach Luke Beveridge said on Wednesday. 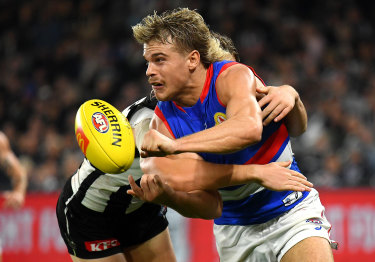 Bailey Smith has served his AFL suspension and will return for the Bulldogs on Friday night.Credit:Getty Images

“He is good. He had to get his head around the fact he had that much time without being able to play and, ultimately, he has just committed himself to his training, contributing where he can to the group, which is difficult for any player.

“He is in a good headspace. He is looking forward to getting back out and playing a game with his teammates. He has managed it extremely well and it will be great to have him back in the team.

“I said to him I was probably more concerned about the headbutt than what happened at the end of last year. He has moved on from all that last year.”

The Dogs, in 10th spot and struggling to remain in contention for the top eight after successive defeats totalling 94 points, have missed Smith’s run and creativity over the past month.

Key forward Josh Bruce, who booted 4.5 in the VFL last week, appears set to play his first senior match since injuring his knee against Essendon in round 21 last year and requiring a reconstruction.

“It’s not great timing – a five-day break after a state-league game – but it seems like he has come through that game. He is healthy, so he should be available for selection,” Beveridge said.

“There is every chance his name will be added to the team sheet.”

Toby McLean, who also underwent a knee reconstruction, and has not played senior football since round 16 last year, will not win a call-up this week. Rookie Sam Darcy is developing well in the VFL as a forward-ruck but is “not quite ready to come into the team yet,” Beveridge said.

The Bulldogs have endured a rugged fortnight, against the Lions and Swans, with their lack of height in defence and scoring options up forward exposed. They have conceded more than 100 points in three of their past four games, with opponents too easily scoring in transition.

That they were blitzed seven goals to two in the first quarter by the Swans also prompted questions about their mindset. 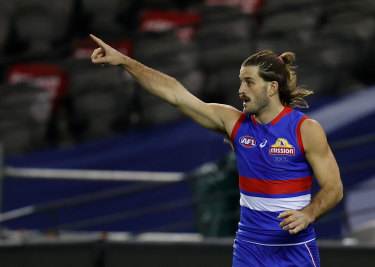 Heading in the right direction: Josh Bruce is in line to return for his first senior match since a knee reconstruction.Credit:Getty Images

“The first quarter, you would like to think it was an anomaly. I think it’s probably the worst quarter of football that we have experienced in my time here,” Beveridge said, having reflected on it through the week.

He said his team had analysed its “methodology” in terms of players making in-game adjustments, and overall tactical decisions, particularly while missing injured half-back Caleb Daniel, with the hope such a situation was not reprised.

They now face a St Kilda side stung by a heavy loss to Fremantle, and also desperate to remain in finals contention with six rounds remaining.

“Now it’s just a matter of getting belief in those two levels – with each other and the way that we know we can play together,” Beveridge said.

“I don’t think the players are feeling the pressure. I think they are excited about the opportunity on Friday night, again, playing against a Saints team who have shown they can be extremely competitive against some of the better sides.

“The harsh reality is we are in the mire, in the middle of the pack. You have got to accept reality but you have got to change your own course through actions and belief.”

The Bulldogs announced they had signed more than 50,000 members for the first time, passing the previous club record of 47,961.