NSW players have shared their disappointment after six teammates were denied the chance to celebrate with them in the middle of McDonald Jones Stadium on Wednesday. 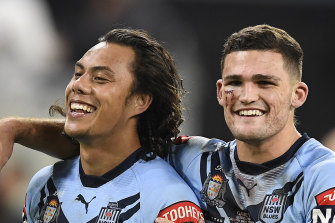 Jarome Luai and Nathan Cleary have been denied attending next Wednesday’s game to celebrate with their Blues’ buddies.Credit:Getty

The Blues pointed out the players were already abiding by level-four biosecurity measures and had not left their homes except for training. A couple of Blues could not understand the difference in allowing players to switch from “club bubbles to the Blues bubble” considering Matt Lodge last week left the Broncos for the New Zealand Warriors.

Tom Trbojevic knew how much it would have meant to his older brother Jake to be part of the trophy presentation after he featured in game one in Townsville. He missed game two because of a glute strain.

“I thought they would have been allowed to all come considering they are all already in a bubble. It’s sad,” Trbojevic told the Herald.

“I can understand the NRL doing what they’re doing with everything going on and all the lockdowns back home. But they’ve been such a big part of this series. They deserved to be with us lifting the shield. It’s the world we live in at the moment.”

Winger Brian To’o is best mates with Luai, drives to and from Penrith training with the five-eighth each day, and even received an impromptu street parade in Mt Druitt after the pair helped the Blues wrap up the series at Suncorp Stadium.

“It’s unfortunate with all the COVID rules, we respect the rules, but we’ll also be thinking about all the boys in game three,” To’o said.

“We just have to get on with it. I’m always texting ‘Romy’ and ‘Clez’ [Cleary] and letting them know I’m thinking about them.”

Fittler spoke at the start of the week about bringing the injured players into camp, including Cleary to work alongside new No. 7 Mitchell Moses. When the camp was originally slated to be held on the Central Coast, Cleary was so prepared he even had another COVID test on Monday.

Wallabies desperate for some overdue silverware