The Blues and Magpies will meet on Sunday in the most significant clash between the clubs in decades. Here are five memorable games including – and since – they last met in a final. 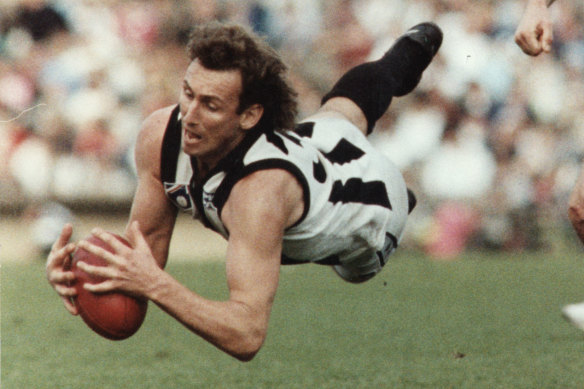 Peter Daicos was brilliant in the 1988 qualifying final but it was not enough to stop the Blues.Credit:Fairfax Photographic

The game: This is the last time the two giants met in a final. On a Sunday afternoon in front of what was the largest crowd to that point of the season, the Blues, eyeing back-to-back flags, booted seven goals to one in the first term before the Pies rallied in the second quarter. However, the Blues took control after half-time, with Craig Bradley and Wayne Blackwell busy. Peter Sartori booted five goals, while Kernahan, Fraser Murphy, Jon Dorotich, David Rhys-Jones and Paul Meldrum each had three. Brian Taylor and Craig Starcevich each booted four for the Magpies, while the brilliant Peter Daicos – whose sons Josh and Nick are set to play on Sunday – had 34 touches and two goals.

The game: The Magpies picked the Blues as their opponents to celebrate the Pies’ centenary but were left to rue what unfolded on a chilly Thursday night. Kernahan, at the peak of his powers, booted seven goals, including a 60-metre bomb, while Steve Silvagni, now regarded as arguably the greatest full-back of all time, supplied four. Greg Williams (33 touches), Craig Bradley (30) and Adrian Gleeson (29) were prolific in the midfield. Daicos was typically brilliant with 27 touches and three goals. Midfielder Scott Russell had a game-high 37 disposals, while Mick McGuane (29) and Tony Shaw (28) were busy. 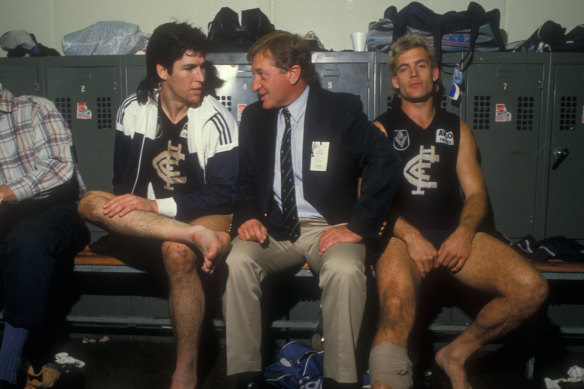 The game: On a warm Sunday afternoon, this match will always be remembered for one of the greatest goals in VFL-AFL history. The roar emanating from McGuane’s seven-bounce goal at the Punt Rd end of the ground – 20 seconds of brilliance from a centre-bounce clearance – shook the stands, punctuating his best-on-ground performance of 23 touches, three goals and three Brownlow Medal votes when pitted against Williams. Daicos, having retired the previous season, was given a pre-game motorcade, and the Magpies honoured him in style with an eight-goal-to-three second half. Sav Rocca booted five goals. For the Blues, robust midfielder Fraser Brown had 36 touches and Justin Madden and Silvagni booted two goals apiece. 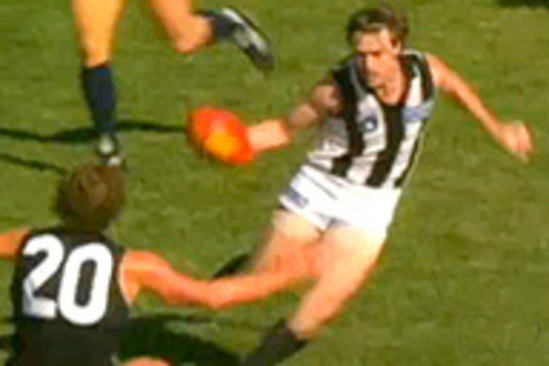 The game: The Blues were on the rise and keen to measure themselves against the premiers, a team that would go on to make another grand final. “For our group, it will be a great time to challenge ourselves. This is the ultimate test in footy at the moment,” Ratten said. What the contest before what remains the largest crowd between the clubs since the ’88 final did prove was that the Magpies were a step better. Small forward Jarryd Blair booted five goals, Chris Dawes adding three. Dane Swan was prolific through the middle, while Ben Johnson and Heath Shaw were busy. Jeff Garlett booted three and Jarrad Waite two for Blues. Judd had 24 touches as the Magpies kicked away in the second term. 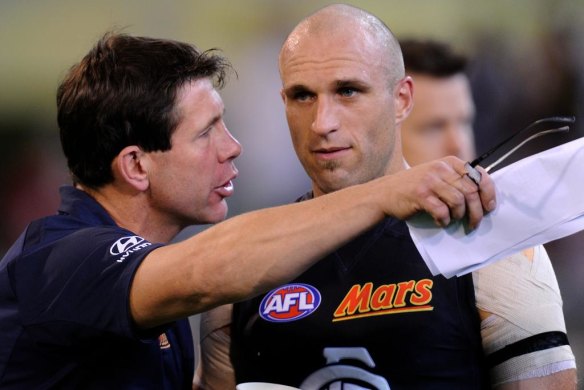 Carlton coach Brett Ratten and skipper Chris Judd had work to do after losing to the Magpies in 2011.Credit:Sebastian Costanzo

The game: The Blues may have spoiled Collingwood’s centenary and 125th celebrations, but the Pies got one back on a night Malthouse, now coach of the Blues, broke Jock McHale’s record for most games coached. The Magpies led by seven goals at half-time and were untroubled thereafter, boasting 15 goalkickers. Pendlebury (32 touches, two goals) was arguably best afield, while Taylor Adams, Jack Crisp and Swan also found plenty of the ball. Blues skipper Murphy had 26 disposals, Kade Simpson 24. Malthouse and the Blues parted ways before the season was done, a 54-game tenure that netted just 20 wins.