Western Bulldogs coach Luke Beveridge says his injury-ravaged side’s “night of carnage” may have been a byproduct of a short turnaround between last Sunday’s win over Essendon and Friday night’s loss to Port Adelaide.

Imposed with a five-day break between fixtures and already cruelled by a mounting casualty ward, the Bulldogs’ stocks were further decimated at Adelaide Oval on Friday night. Centre half-back Tim O’Brien was substituted out with a calf injury in a calamitous third quarter, before half-forward Laitham Vandermeer went down clutching his hamstring moments later. 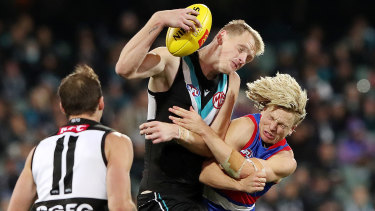 Then, in the fourth term, goalsneak Cody Weightman broke his collarbone in a collision with the much bigger Sam Hayes, leaving key defender Ryan Gardner, who was hobbling with a calf issue of his own, with no option but to soldier on.

“It was a night of carnage for us, when you lose three players in the fashion we did,” Beveridge said in the aftermath of the clash. 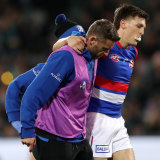 “The five-day break might have got us with some of that, unfortunately.

“It was a high-end running game the week before against Essendon.

“One or two of the guys in Tim O’Brien and Laitham are quite [injury] prone … when they went down that destabilised us a bit.

“When our personnel started going down, it compromised what we were able to achieve with our role players.

“That’s why I came down to the bench in the last quarter – we essentially had one player who we had to keep rotating, so players had to play positions they were unaccustomed to.”

At least two of the injuries to come out of the 17-point defeat – Weightman and Vandermeer – appear to be long-term.

“Cody has broken his collarbone, Laitham seems like he’s got a high-grade hamstring injury, and Tim O’Brien appears to have hurt a calf,” Beveridge confirmed.

“A couple of them are quite serious.

“We were right at the bare-bones coming into the game.

“We’ve just got to ride it out and persevere.”

The Dogs expect skipper Marcus Bontempelli to return from an ankle problem for Friday’s clash with Collingwood at Marvel Stadium.

They are also hopeful key backman Alex Keath and influential ruckman Tim English will be fully recovered from their hamstring complaints in time to take on the Magpies.

“We think he [Bontempelli] will be OK. He’s just had a series of things that were hampering him over a period of time, and it all came to a head this week,” Beveridge said.

“The week off will do him the world of good and hopefully he’ll be really healthy come Friday night.

“Maybe Tim English and Alex Keath might be available as well.

“Over the next few weeks hopefully there’s an injection of players off that injury list, but that’s probably offset by the ones we lost [against Port].

“Clubs and teams go through it and we’re getting our lot at the moment, unfortunately.”

Four-try Lions see Jones and Tipuric forced off through injury