A 210-centimetre ruckman targeted by Carlton in the mid-season draft has been forced into isolation after visiting a tier one COVID-19 exposure site and cannot complete full medical examinations at rival clubs.

Club and AFL sources have confirmed that Alex Mirkov, who has been playing for Carlton’s VFL team, went into a 14-day isolation on Sunday.

While six clubs have spoken to Mirkov – and the Gold Coast Suns could beat the Blues to the punch by taking him in Wednesday night’s mid-season rookie draft, having interviewed the ruckman on Zoom on Monday – they have not been able to medically examine him in person due to the restrictions. 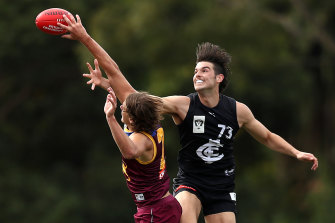 In addition to the Blues, who are keen to take the giant, Hawthorn, Essendon, Gold Coast, West Coast and Sydney have spoken to Mirkov, originally from Old Ivanhoe in the amateurs, who spoke to another club on Zoom last Friday. 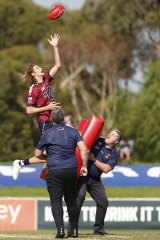 It is unclear whether the lack of an in-person medical would act as a deterrent to clubs, besides Carlton, recruiting Mirkov.

Richmond, meanwhile, appears to be the only hope of a return to the AFL for ex-Collingwood and St Kilda player Nathan Freeman, who has been starring for Frankston in the VFL after overcoming his persistent hamstring issues.

Ex-Geelong and Port Adelaide follower Wylie Buzza – who has been playing with Werribee in the VFL – is another mature ruckman whom the Blues may consider if Mirkov is picked by the Suns. The Suns have shown strong interest in Buzza as a fill-in, following injuries to big men headed by the season-ending injury to co-captain Jarrod Witts.

North Melbourne are set to pick teenage tall Jacob Edwards at pick No. 1. While there is intrigue surrounding what Hawthorn will do at selection No. 2, rival clubs expect the Hawks to draft young Oakleigh/Collingwood VFL ruckman Ned Moyle with choice, allowing them to select Box Hill inside midfielder Jai Newcombe later in the draft.

Collingwood is expected to snare Sturt’s Ash Johnson – a half-brother of Adelaide’s Shane McAdam and 193cm forward – with their first pick (No. 3 overall). Teenage key forward Jackson Callow, from Norwood and a former Tasmanian, is another potential forward recruit for the Magpies, who appear keen to bolster their weak scoring power.

At least one other club is of the view that Sydney is tempted to get in ahead of the Hawks by asking Newcombe in the first round, despite the onballer placing special contract terms – the remainder of this year, plus three further years – on his head. 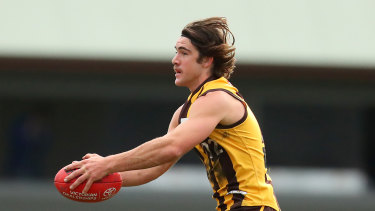 As of Monday, the Hawks still only had one list opening but had the capacity to place James Sicily on the inactive list to free up another spot.

Rival clubs have linked Essendon to Corey Preston, a midfielder/forward playing for the Bulldogs’ VFL team, Footscray, though the Dons’ intentions are unclear. Carlton also has spoken to Preston.

Gold Coast have also spoken to former Essendon rookie Fraser Thurlow, a mature-age ruckman who has been playing well for Southport.