Home » Rugby » Blues hold on for thrilling win over Hawks

Carlton coughed up a 41-point lead before fighting back late to overcome the inspired Hawthorn by the barest of margins in an MCG blockbuster on Sunday.

It was a game that promised the world and delivered as much in front of a packed and raucous ’G, but it was the Blues who sent their fans home happy, holding on for a thrilling one-point win at the home of football. 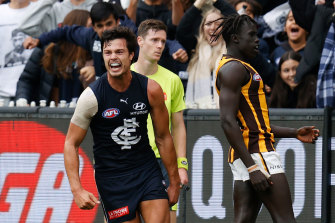 Jack Silvagni celebrates a last-quarter goal for the Blues.Credit:AFL Photos

Both sides had exceeded expectations in the opening two rounds, taking undefeated records into the affair, but it was the Blues who appeared to underline their emergence on the competition, piling on nine of the first 11 goals to open a margin as big as 41 points midway through the second term.

The Hawks looked a shell of the side that had pummeled Port Adelaide just seven days earlier in the first half. But as Collingwood fans learnt the night before, football can be a game of momentum, and for young sides, stopping that momentum can be hard to achieve, particularly within quarters.

But the half-time break came at a much-needed moment for the Hawks, and their play-on-at-all-costs brand thrived against the seemingly tired Blues.

They took their chances through the corridor, and those chances paid off, led by Changkuoth Jiath off the half-back flank.

Jiath finished with eight marks and 11 rebound-50s to go with his 27 disposals, and Hawthorn’s forwards were the beneficiaries of the direct ball movement. Jack Gunston kicked two final-quarter goals, but it was some brilliance from both Tom Mitchell and Harry Morrison, who kicked consecutive goals early in the last term, that got the Hawks crowd into the contest. 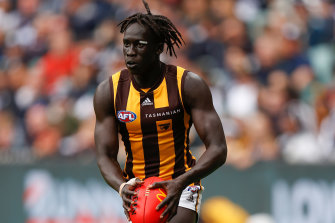 The Hawks hit the front early in the final quarter, but the Blues rallied thanks to a brilliant goal by Jack Silvagni at the 20-minute mark that put them six points up. A rushed behind made Hawthorn’s job all the more difficult, and despite a late goal from Jack Gunston to cut the margin back to a point, they were unable to cap off the incredible comeback with a win.

Sam Docherty and Jacob Weitering were particularly resolute in defence in the final term. Docherty finished with 13 marks, six of those in the deciding final term. Sam Walsh (32 disposals), Patrick Cripps (31), Matthew Kennedy (30) and George Hewett (27) were the Blues’ leading accumulators.

On a weekend where both Port Adelaide and Collingwood lost despite having more scoring shots than their respective opponents, and the Western Bulldogs sprayed a wild 9.17 to effectively beat Sydney by 11 behinds, the Blues couldn’t have been more efficient early in front of the big sticks.

They had 9.1 on the board less than seven minutes into the second term, with Harry McKay, Charlie Curnow and Jack Silvagni each boasting two straight goals to inflict scoreboard pressure on their opponents.

But the Blues’ lead – and their accuracy – dwindled away. They kicked 1.5 over the next quarter and a half, as their 41-point lead was overcome early in the final term by the rampaging Hawks, who kicked 6.2 unanswered from the fifth minute of the third term to the 10th minute of the final quarter.

But with scores level 20 minutes into the last, it was Silvagni who stood up again, check-siding a goal from the barest of angles to put his side six points ahead.

We’re only three rounds into the season, but Patrick Cripps has quickly reaffirmed why he’s one of the competition’s most powerful and damaging midfielders. 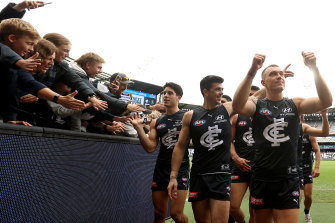 Skipper Patrick Cripps leads the Blues off the field.Credit:AFL Photos

The Blues skipper, who led the competition with centre clearances and was second in the competition in score involvements and inside-50s after the opening two rounds, continued his sensational form on Sunday.

He finished with 31 disposals, six clearances – four from centre bounces – and five inside-50s.

Cripps opened the season with Sportsbet as a $26 Brownlow contender, but was wound into a $5 outright at half-time of Sunday’s match.