Home » Rugby » Bombers to ease McDonald-Tipungwuti back through the VFL

Essendon forward Anthony McDonald-Tipungwuti will have to build his fitness through the VFL before he is considered for senior selection.

McDonald-Tipungwuti was a key figure in the Bombers’ rise last season, booting 34 goals (behind only Jake Stringer’s 41), but had an interrupted pre-season because of a calf problem and a break from the football program. 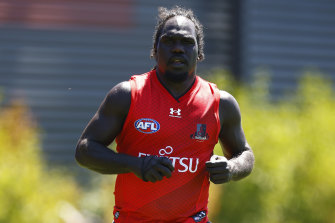 He was granted leave by the Bombers on February 5 but has recently returned to training.

However, as the Bombers prepare for Saturday night’s community series clash against St Kilda, head of football Josh Mahoney said McDonald-Tipungwuti still had work to do and was set to be overlooked for senior selection for the opening rounds of the home-and-away season.

“He’s back training. He’s in full training at the moment, working on his fitness. He’s probably a few weeks away from being able to play a game and then he’ll build his fitness through the VFL,” Mahoney said on South Australian radio.

“All things going well, we’ll have him for AFL selection as quick as possible. He’s such an important and dynamic player for us.”

The retirement of Cale Hooker and the absence of Stringer and McDonald-Tipungwuti against the Saints will give the Bombers the chance to experiment with a rejigged forward line. Stringer, who has had groin issues, said this week he expects to be fit for round one against Geelong.

“I can’t tell you who that will be right now, which is half-exciting, because we know someone will step up as we saw last year,” Mahoney said of the forward line.

“We’ve got a few different people playing down there. We’ve got the South Australian in Kane Baldwin who’s on our rookie list, he’ll get an opportunity and play again this weekend.

“Whether it’s another young guy like him who steps up, that’s what we’re really excited about.”

Hawthorn assistant coach Adrian Hickmott said stars James Sicily (knee) and Jack Gunston (back) were ready to step up their comebacks from injury. Both emerged unscathed from a practice match against Collingwood last week. The Hawks face Richmond in Devonport on Saturday.

“The way they have been training over the pre-season has been fantastic. To have those guys come back into the side is exciting for the group themselves and the young players around them. Their leadership on ground was extremely impressive,” Hickmott said.

Meanwhile, the AFL has transferred the round-nine AFLW clash between the Brisbane Lions and North Melbourne on Sunday from the Maroochydore Multi Sports Complex to the Whitten Oval because of Queensland’s storms. The match will still begin at 1.10pm.

‘What’s Ponga to do?’: Fans fume over collision controversy