Marcus Bontempelli is already regarded as a "Rolls-Royce" by Western Bulldogs supporters. And for good reason. The smooth-moving playmaker is a premiership star, dual All-Australian and three-time Charlie Sutton medallist. 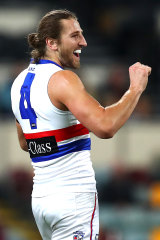 But in an ominous warning to rivals, coach Luke Beveridge says his captain has added a new strength that has him becoming a "really complete player".

In his first year as skipper, Bontempelli, 24, has had several challenges to deal with, not the least helping his side adjust to life in a quarantine hub. The Dogs have twice lost matches in bunches, the most recent a three-game skid before rebounding against the winless Crows last weekend.

Bontempelli was instrumental in the match, with 33 disposals, including 12 clearances and 11 score involvements, enough to earn him the full 10 votes in the AFL Coaches Association award. Now comes the challenge of a rejuvenated Melbourne at Metricon Stadium on Saturday.

Aside from his on-ball duties, he is also likely to spend time up forward, where he has made good use of his height, an imposing 193 centimetres, to become a major aerial threat.

"I have said in the past that our midfield is so interconnected that when one or two of them has a down day, it effects the rest of us, and the flow on is we are really on the back foot as a team," Beveridge said on Thursday.

"He has been very, very influential this year, Marcus. He has had to grow into his captaincy responsibilities and bones and juggle an inauspicious start to the year as a team to try to lead through action and words. He has come through that with flying colours.

"We had him forward at different times … and that is not necessarily an intention we want to follow through on. We want to do it here and there to manage the load through that midfield area as well.

"What Marcus probably doesn't get strong acknowledgment for is what he does when he doesn't have the ball in his hands. His game last week was such a rounded performance.

"What he has added to his game this year, and probably started from the Sydney Swans game, is an aerial component. It has sort of been there in the background but he hasn't really established himself as an aerial threat. Now, he has taken more contested marks in recent times and he can actually impose himself in different situations, where he hasn't necessarily in the past.

"He is becoming a really complete player."

Those aerial marks mean he can have a greater impact on the scoreboard. He had two goals against the Swans in round four and had a season-high six marks against the Crows, with another two majors. But the statistics show his development remains a work in progress.

That key forward Aaron Naughton is back means the Bulldogs have their prime marking target inside 50, and he could have Josh Bruce, rested last week, by his side this weekend. But with a menacing Bontempelli added to the list, the Dogs should no longer have scoring issues. 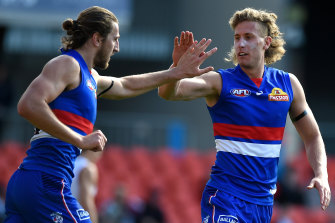 Bontempelli with Aaron Naughton, who was back in form with six goals last week.Credit:Getty Images

Hard-running playmaker Jason Johannisen (ankle) appears likely to return but ruckman Tim English (ankle) needs to pull up well from training on Thursday to take his spot. English has played every match this season but Beveridge said the Demons' ruck injury woes would not influence whether English played.

The Dogs are outside the top eight by two points and time is ticking on their finals hopes. With five rounds remaining, Beveridge wouldn't say how many wins he thinks the Dogs need but with the Demons, Geelong, West Coast, Hawthorn and then Fremantle to come, they will probably need to salute in at least four matches.

The midfield match-ups against the Demons, who have won three straight albeit against the struggling Crows and Kangaroos and the injury-hit Magpies, will be crucial.

Dogs "influencer" Lachie Hunter made a strong return against the Crows in his first senior match in five weeks, having 29 disposals and nine score involvements, and made a point he had no intention of leaving the club by emotionally grabbing his guernsey after slotting a goal in the third term.

"They [Melbourne] have really got the ball moving there, some of their mids have hit 'go' on their match-winning potential. We saw Clayton Oliver play a very, very good game over in Adelaide in recent times and, obviously, there is some uncertainty with their ruck situation and how they might enter the game," Beveridge said.

Freo remain undefeated after beating Dogs in a thriller