‘I love being the joker in the pack’: Bristol prop and New Zealand World-Cup winner John Afoa on his Superman act, scrum chats and his move into coaching as the 38-year-old returns at the sharp end against Exeter

When he isn’t impersonating Superman or demanding wine from a rival prop during a game, John Afoa can be deadly serious about his work — with painful consequences.

Bristol’s veteran ex-All Black tighthead and scrum coach is not taking it easy at the age of 38. Behind the smiling exterior there is still a committed competitor who wants to make his presence felt on the field. Unfortunately, that commitment caused Afoa to miss the start of this season.

‘When it’s time for training I’ll be the first in the frontline trying to smoke the academy kids or the other boys,’ he joked. ‘That’s how I injured my eye. We had an internal (pre-season) game, I flew in trying to smoke one of the boys and I fractured my eye socket. I just can’t help myself!’ 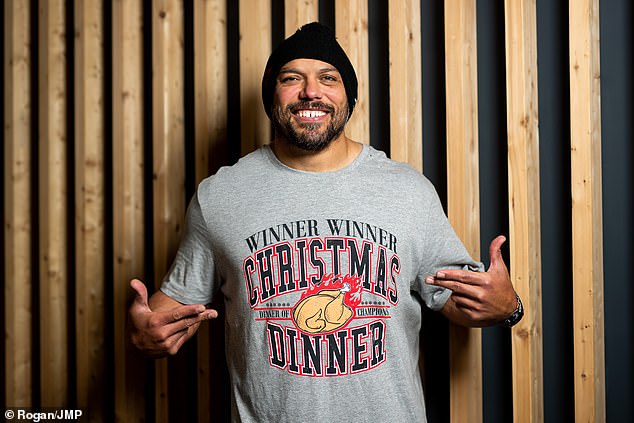 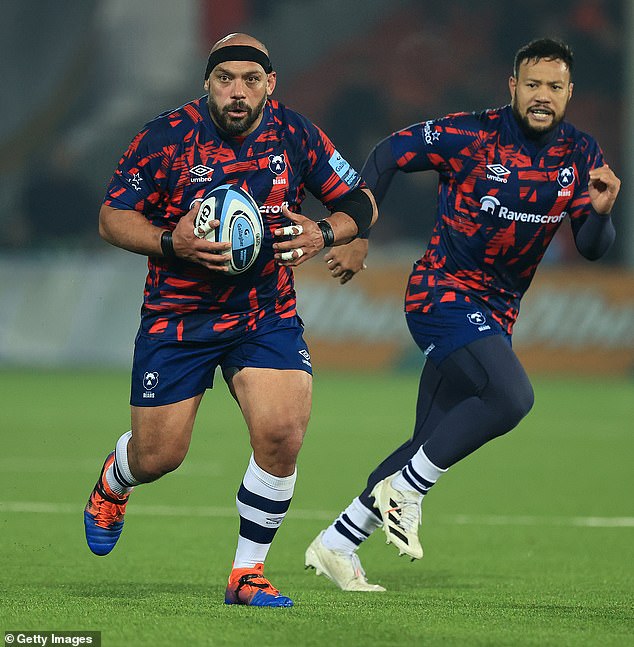 So, Afoa can be a fiery character but he is widely known as a fun one too. After helping his country win the 2011 World Cup, he arrived at Ulster and was taken aback by a different culture. It was all about knowing when to flick that switch and go into game mode and it evidently made a lasting impression on his arrival from Auckland.

‘It was a real shock after New Zealand where it was all very strict, with no loud music and no talking on the bus,’ he said. ‘When I got to Ulster, I couldn’t believe how relaxed it was. I was out warming up 40 minutes before a game and the other boys were still in the changing room, getting changed and sitting around eating Percy Pigs! But once I’d been there a while I appreciated that that was how they do things. Once that whistle goes they’re still ready to go.’

That mentality has been fully embraced by Afoa during stints at Ulster and Gloucester and at Bristol since 2018. Late last year he ran out of the tunnel after half-time at an empty Ashton Gate with one arm raised and a big grin on his face. The showman’s entrance went viral.

‘I’m haunted by that Superman thing because every time I go somewhere now people mention it,’ he said. ‘The boys were feeling good at half-time and I forgot about the cameras being there because it was in the Covid time when there were no crowds. I was talking to Chris Vui (Bristol lock) and we were just mucking around. 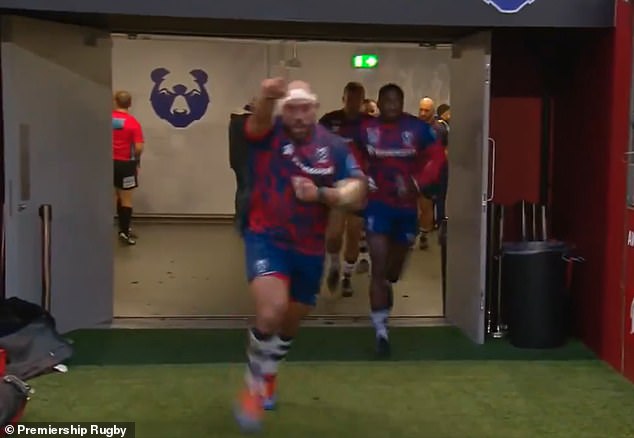 ‘I think we were playing Worcester and I caught Matt Kvesic’s eye, so I did it, just so he would have a laugh. I didn’t realise it was on camera. Then I got home and had about 20 messages from people saying, “What were you up to there?”. I took it too far there but I like to keep it casual in the way I build up to a game. I try not to waste too much energy by getting too nervous or too psyched up. Sometimes the boys need a bit of a laugh.’

His light-hearted attitude is in keeping with a modern-day trend in the game, certainly in this part of the world, where props are often the best talkers and jokers.

‘No-one takes us seriously so props end up being the clowns of the team and the characters in the game,’ said Afoa. ‘Next year, we will have two of them — Sincks (Kyle Sinckler) and (Ellis) Genge. They are their own men and they walk to their own tune. Good luck to Pat (Lam, director of rugby) trying to handle those boys!

‘A lot of the chat is because there are lots of scrums and line-outs. The older boys enjoy it — like Waller at Northampton and Batty at Bath, who have been around a while and are comfortable in their game, so they don’t mind chatting rubbish for 80 minutes. The young guys tend to keep their heads down and get on with their job. 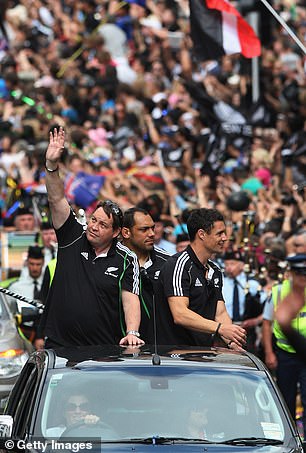 ‘You want to chat but you don’t want to give anyone any extra ammunition to come and try to kill you! Especially at my age, the last thing I need is people trying to chase me down. They’re going to catch me in the end because I’m so slow now. So I just try to have a laugh.’

Asked to identify the best talkers, Afoa looked beyond the famously vocal Joe Marler and Bristol-bound Leicester captain Genge, to nominate a former club-mate, adding: ‘I’d say Val (Rapava Ruskin) at Gloucester. He’s funny in his own weird way! He’s always trying to crack jokes. When we played them at Kingsholm he kept talking and talking.

‘I messaged him during the week and he said he’d bring me a bottle of red wine. We were in the middle of the game and I just said, “Hey, where’s that bottle of Bordeaux you promised me?”. The boys were looking at me like, “Why have you been talking to him during the week?”. Val just said, “Shut up old man, you should have retired”. I said, “I should have retired five years ago but look at me now”.’

Banter or not, Afoa — who is on playing duty again as a replacement for Bristol at Exeter on Saturday — is still operating at the sharp end almost two decades after his Auckland debut. In all that time he has not just come up against opponents who can talk the talk; there have been plenty who could walk the walk too.

‘Touring South Africa, playing up in the Highveld was always interesting,’ he said. ‘I remember we played against the Cheetahs one year in Bloemfontein. They had a big pack anyway but for some reason they loaded their bench with looseheads.

‘I played one loosehead for half a game, then another loosehead came on for 20 minutes, then Os du Randt — towards the end of his career— came on for the last 20. I ended up playing against three different props! I was just thinking, “This is illegal, surely?!”. 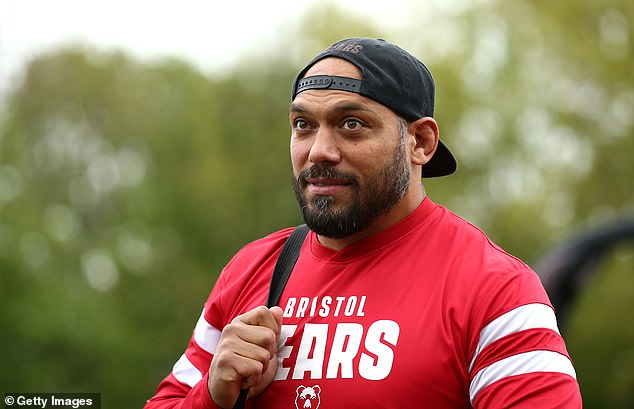 Being a coach has been a learning curve – in particular, working out where to sit during games

‘When I started in the Premiership we’d come up against Leicester who had (Marcos) Ayerza at loosehead. Every time we played them, guys would pull out and say, “I urtz my back!”. He was a demon to scrum against. He had no neck, just all shoulders, so you couldn’t bend him. He was a nightmare.’

Being a coach has been a learning curve — in particular, working out the best place to sit during matches. He has acted as a water-boy and enjoyed that, as a way to still feel connected to the action.

Passing on his wisdom involves a lot of painstaking reviews of drone footage. It is more technical and tactical than when his career began.

‘There’s still gamesmanship, but it’s less of the old-days “dark arts” when they were trying to head-butt each other or punch each other, eye-gouging and all that stuff,’ said Afoa. ‘Now it’s about winning penalties or free-kicks. It’s more strategic than violent.’

There is plenty that the likes of Sinckler and Genge can learn from this well-travelled master of the evolving dark arts — not least when to be serious and when to be Superman.