Home » Rugby » Broncos have ‘responsibility’ to make up for men’s flop: Brigginshaw

Broncos skipper Ali Brigginshaw has told of the "responsibility" on the women's team to help the club recover from the disapppointment of the men's wooden spoon as her side targets an NRLW three-peat.

Brigginshaw said the squad had a visit from Sam Thaiday ahead of the NRLW grand final this weekend, who told the women's side they were "raising the bar" for the men's side next year. 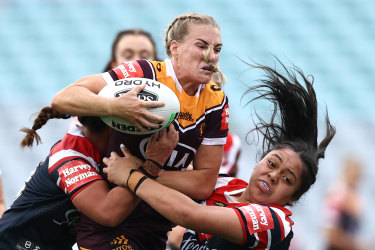 Brigginshaw was crowned the Dally M female player of the year on Monday.Credit:Getty

Brigginshaw said she received a flurry of messages from the likes of Kevin Walters, Maroons great Scott Prince and ex-Broncos skipper Corey Parker to congratulate her on winning the Dally M on Monday night.

"They were the first couple of messages, apart from my partner Kate, that came through," she said. "During the pre-season, there are times there where you think I just cannot go on, this is hard, when you get an award like that you realise that's why you put in all the hard work."

Brigginshaw was on crutches for three months earlier in the year after suffering from a syndesmosis injury in early March, with the COVID-19 delay coming as a blessing in disguise for her.

Originally, doctors cleared Brigginshaw of injury before she got a second opinion from a surgeon, who said he would need to operate.

"I've had major injuries but now I feel like I can deal with them a lot better than I used to," she said. "I watched a lot of inspiring movies, but I was still able to do upper body … just to keep active."

The Broncos will be gunning for their third consecutive title against the Roosters on Sunday during the match, which will be a curtain-raiser to the men's decider.

Brigginshaw said the players have been sharing quotes from the Netflix documentary The Last Dance which follows the 1998 Chicago Bulls' journey to their sixth NBA title in eight years.

"I said to the girls this week before training, 'You will never regret working hard to win a premiership'. It's the best feeling you will have," she said.