The NRL has hit the Broncos and 10 of its players with fines totalling $140,000 for breaching biosecurity protocols during a pub visit.

The governing body issued a breach notice with a proposed penalty of $75,000 for the club, while each of the club's full-time players will be fined 5 per cent of their salaries – totalling $65,000 – for attending the Everton Park Hotel on August 1. The club's three development players at the venue will have a portion of their fines suspended. 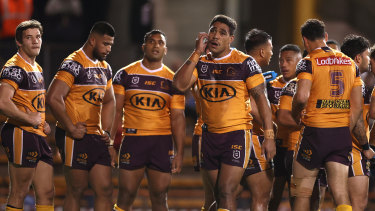 The Broncos’ season from hell has just gotten worse.Credit:Getty

At the time of the breaches, Brisbane players were permitted to dine at restaurants and cafes but were not permitted to sit in pubs and gaming areas. The players sanctioned are Jake Turpin, Kotoni Staggs, David Fifita, Cory Paix, Keenan Palasia, Sean O'Sullivan, Corey Oates, Ethan Bullemor, Josh James and Tyson Gamble. The latter three are development players and won’t be out of pocket if there are no further breaches.

"We have taken our time to thoroughly investigate this matter so we could gather as much evidence as possible to determine exactly what happened at the venue,” NRL chief Andrew Abdo said.

"It is our view that this breach involved a significant failure of the club to properly administer the League's biosecurity protocols."

'Today's sanctions send another clear message to all players, officials and clubs that breaching protocols will not be tolerated.'

"There are two aspects to every biosecurity breach,” he said.

“Firstly, a biosecurity assessment is carried out by our experts to determine the risk of infection to other players and the general community. In this case it was determined that the risk was negligible given the conduct of the players, the timing of disclosure and the lack of community transmission in Brisbane.

"As such, the advice from our experts was that there was no need for players to be placed on a 'COVID hold'.

"In other cases, players and officials who breached protocols in or around hotspots in NSW were placed on a 14-day 'COVID hold' because infection rates in those regions are much higher. Those decisions were based on a biosecurity risk assessment, not an NRL suspension.

"Today's sanctions send another clear message to all players, officials and clubs that breaching protocols will not be tolerated."

The Broncos have accepted the sanctions and claimed club powerbrokers were not aware of the pub visit.

“We accept the imposition of the $75,000 fine, as the club has ultimate accountability for the actions of our players,” Broncos CEO Paul White said.

“The players will also pay a price in terms of individual sanctions totalling $65,000.

“It is an expensive lesson for us all, but it reinforces how important these protocols are to the survival of our competition and community health.”

The NRL thanked Queensland Police and Queensland Health for their assistance during the investigation.