Collingwood coach Nathan Buckley maintains he did not tell Adam Treloar that senior players wanted him out of the club, and says the midfielder may have misconstrued the message he was trying convey.

Buckley spoke for the first time on Monday morning about the Magpies' trade period fire sale, which angered fans and ended in the club losing Treloar, Jaidyn Stephenson, Tom Phillips and Atu Bosenavalugi for little more than pick 14 and a future second-round selection. 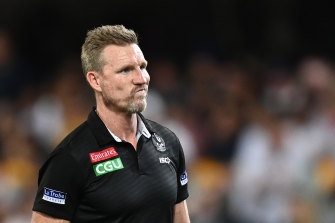 "The leaders were aware of the decision that the list management group had made soon after the season," Buckley told SEN. "That was done out of respect for the leaders and [to] provide genuine support.

"One specific bit of feedback [to Treloar] related to on-field connection. Potentially that put together [with telling senior players] was perceived as 'your teammates don't want you at the football club'. There's something in my communication that has failed, I need to be better."

Stephenson has complained that he did not hear from anyone at the club after he was told by management he was up for trade.

"My manager sort of came to me, and then I heard nothing from the club. I gave Bucks [Buckley] a call myself to see what was going on and he just pretty much said, 'Mate, look for a trade as aggressively as you want and we'll try facilitate it.' There wasn't a very clear reasoning or anything but like I said I think it's all worked out for the best," Stephenson said last Thursday, after his trade went through.

Buckley responded to that claim on Monday: "That was floated through our list management crew with his management. Jaidyn was aware in his exit [interview] that there was a possibility that we would explore that and look for that.

"He wanted to confirm if this is what I was looking for. 'Is this what you want?' I had to be clear to him then that this is where the football club needs to go. If you've got an opportunity elsewhere, mate, I would take it."