Sam Burgess hinted a decision on whether he returns to the NRL as a coaching assistant could be imminent after making a surprise visit to NSW training on the eve of their State of Origin defence.

Burgess, who is coaching the Russell Crowe-backed Orara Valley Axemen on NSW’s mid-north coast, made a flying visit to Sydney and watched the key Blues session alongside coach Brad Fittler at Sydney Olympic Park on Sunday evening.

It’s one of the few times Burgess has appeared in the spotlight since the NRL cleared him to return to South Sydney – or any other club – after allegations made by his ex-wife Phoebe. Sam Burgess has denied the allegations.

While admitting he would have loved to have been involved in Origin as a player, the Englishman has outlined his ambition to return to the NRL environment before eventually embarking on his own head coaching career.

Dolphins coach and Burgess’ former Rabbitohs mentor Wayne Bennett took time out of his schedule to watch the Axemen play Macksville last month, and could offer the Clive Churchill Medal winner a role at the NRL’s newest franchise.

Asked about a return to an NRL club, Burgess said: “There’s a couple of things in the pipeline. I’ve got a couple of decisions to make about what’s best for my development so we’ll see how we go. 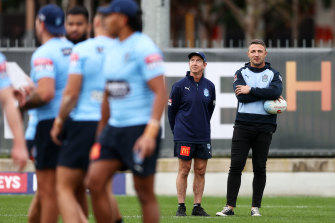 “[Coaching Orara Valley] is the best thing I’ve done and I’m out of the headlines. I’ve made mistakes without [the scrutiny]. It’s not as high a level, and I understand it’s my first year doing it, but it’s been really good.

“I’ve been great friends with Freddy for the last 10 or 12 years and he just reached out. By chance, I was in town. I miss the high-pressure environment as well, and it was good to be around here and feel the intensity.”

Fittler has always been proactive in bringing more knowledge to the Blues, whether it be from rugby league or other sporting and lifestyle speakers, and Burgess’ cameo was one which even caught NSW players unaware.

He’s someone who as a captain, I was very lucky to play under, and as a coach he’s someone you’d want to play for

“We’ve let the Englishman wear the blue jumper and he’s only going to add to what we’re doing, and it’s nice to have him here.

“I’ve got no doubt he’s going to be a coach one day – and a very good coach.

“He’s someone who as a captain, I was very lucky to play under, and as a coach he’s someone you’d want to play for.

“I think whenever that times comes – I know he’s doing a good job up there at Coffs Harbour at the moment – he’s going to make a good coach one day.” 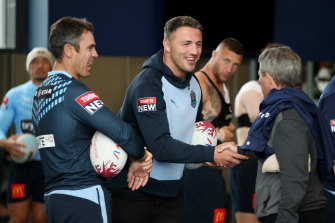 Players like Burgess and fellow former English international James Graham would have been walk-up Origin starters in their pomp, while the NRL has previously rejected Queensland attempts to have Tonga’s Jason Taumalolo qualify for the interstate contest.

“I would have loved to have [played],” Burgess said.

“It would have been right up my street, but I’m a purist of the game. I do like the way it is at the moment. And I reckon it would have taken a few years off my career too.

“I’ve had a few friends who have been in the Queensland team so I’ve always had a little soft spot for them too.

“There’s not an ultimate patriotic side of me that’s a diehard, but I’m going for the Blues this series.”