Calf tightness has forced Geelong star Patrick Dangerfield out of the match against St Kilda, throwing his preparation off track with just two games remaining for him to play before finals.

The 32-year-old reported tightness during the warm-up before undergoing an impromptu fitness test in front of the Cats’ medical team before deciding to pull out of the match late, with Luke Dahlhaus replacing him in the team. 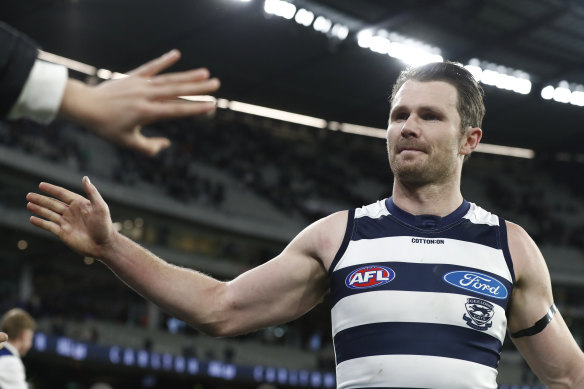 Dangerfield told Channel Seven he was relieved in the end when he decided to pull the pin as he was agonising over the decision for several minutes but “with where the season is at” it was a sensible call.

The Brownlow medallist was best on ground against the Western Bulldogs last round and looked on track for a big finals series having had a careful preparation following on from what the club said was “a corked calf” earlier in the year.

He has not been fully fit in the Cats’ past two finals series and the club is determined to bring him into the finals fresh to give him his best chance of performing at his best. He had played five consecutive games before this latest hiccup.

The Cats also managed Mark Blicavs, who had played 33 games in a row, and ruckman Jon Ceglar was made the sub as Rhys Stanley returned.

The club also rested skipper Joel Selwood, meaning it was the first game the Cats had played without either of the pair playing since Dangerfield joined the club in 2016.