As talking heads debate how much Cameron Munster will be worth in 2024, he showed exactly why he is priceless to the Melbourne Storm in their 34-18 win over Cronulla Sharks on Saturday night.

Munster scored a superb solo try and had a hand in three others, breaking open an otherwise physical and engaging contest between two clubs on track for top-four finishes.

There are very few players in rugby league who can cut through a defence as good as the Sharks’, but Munster is one of them – as shown by this performance in front of a crowd of 16,286 at AAMI Park. 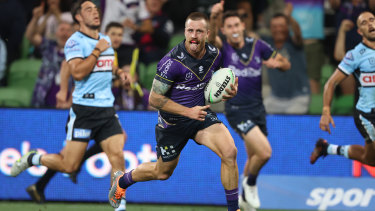 Cameron Munster was in imposing form for Melbourne against Cronulla.Credit:Getty Images

Munster is contracted until the end of 2023 but speculation has raged that clubs are already looking to lure him away – but whatever that price tag is, it will be substantially higher now.

Melbourne’s only concern will be back rower Felise Kaufusi, who was twice placed on report for a late tackle and a dangerous tackle, the latter incident seemingly the more serious of the two.

The Storm lost both captain Jesse Bromwich and his brother Kenny to positive COVID-19 tests in the lead-up to the game, leaving half-back Jahrome Hughes to lead the side.

The Storm players spoke all week about their affection for former teammates Dale Finucane and Nicho Hynes, but the two new Sharks weren’t spared in a brutal first half.

Finucane was forced from the game eight minutes in when he ran into the forearm of Storm prop Nelson Asofa-Solomona and was left staggering. Finucane protested he was right to continue but he failed his HIA test and spent the rest of the night on the bench.

Hynes was almost cut in two by a tackle from Kaufusi which struck him flush on the ribs after he unloaded a pass. Hynes, however, kicked the subsequent penalty goal for a 2-0 lead.

Both sides were winding up in their tackles in a manner usually left for the finals and good field position was hard to get for either side.

But on 20 minutes the Storm had the first try as Hughes fed Munster who threw an inch-perfect cutout pass to winger Nick Meaney who beat one defender before passing inside to Justin Olam who scored in the corner and a 6-2 lead.

On 29 minutes that lead was extinguished as the Sharks switched play from their left wing to the right, touching the hands of more than half their team and catching Storm short of men as Siosifa Talakai jogged in for a try, Hynes converting for an 8-6 lead.

The Storm received a penalty after Papenhuyzen was awkwardly twisted in a tackle which appeared to hurt his troublesome ankle with Cameron McInnes placed on report. 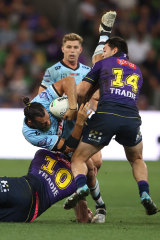 Nelson Asofa-Solomona and Brandon Smith were at their brutal best for the Storm.Credit:Getty Images

On the subsequent play, Munster received the ball 40 metres from the line, threw two dummies, and broke through the line throwing another dummy and stepping clear of the last tackler to score a classy try which was converted for a 12-8 lead at half-time.

Munster took the kick-off to start the second half and his swirling kick confused the Sharks who let it bounce in play and then out of bounds, which saw the Storm get the ball 20 metres from the line. They ran the perfect set play and scored as Hughes setup Olam for his brace and an 18-8 lead.

The Sharks didn’t drop their heads, and on 46 minutes Ronaldo Mulitalo broke the line and leapt over for a try in the corner. Hynes hit the post to leave scores at 18-12.

Munster was again the provider on 50 minutes when he dummied inside and broke the line from 40 out, and this time Papenhuyzen ran with him and picked up an easy try and a 24-12 lead.

Hynes and Talakai teamed up to put Mulitalo over for his second try with 18 minutes to play cutting the lead to 24-18.

But Harry Grant used brute strength to force the ball down for a try with 15 minutes to go. The Storm’s defence had a tough night, but their attack made sure they took the victory.