Home » Rugby » Can Dees get better? Can Dogs tame Gawn? Burning questions ahead of the season opener

Why is the grand-final rematch opening the season and is it a good idea?

This fixture was initially floated by the Demons as a thank you to the Victorian-based supporters of both teams who missed last year’s entire finals campaign because of border restrictions. It’s been well embraced, so expect some 80,000 at the MCG in time to watch the Demons unfurl their premiership flag and soak up the atmosphere of being at the footy. The AFL is keeping a close eye on attendance and broadcast ratings figures, and there is no reason why a grand final rematch should not permanently open the new season. The storylines abound, and it ensures the league of blockbusters on three straight nights, even if it means the season at some point opens interstate. 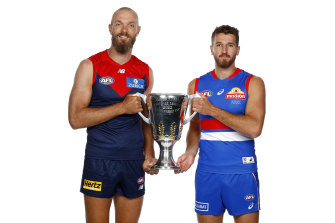 Are the Dogs carrying any psychological scarring from the grand final loss to the Demons?

That typically happens after repeated defeats, so we are not there yet with this growing rivalry – though it has been fuelled by fallout over a celebratory song. But the manner in which the Demons delivered a seven-goal burst in 16 magical minutes to end the third term at Optus Stadium still has the Dogs shaking their heads, and perhaps wondering if they are good enough to handle the Demons’ array of weapons. “Obviously disappointing, heartbreaking to lose it that quickly, but I think the positives are how well we travelled and how well we came out of that finals series to get to that point,” Tom Liberatore said in recent days. We’ll know more if the Demons get a run on and the Dogs again cannot find a way to remain in the game.

Can the Demons get better?

Having broken a 57-year premiership drought, the Demons can sniff an era of success. Skipper Max Gawn has repeatedly stated he does not want his side to be a one-hit wonder, and vice-captain Jack Viney insists there has been no complacency physically or mentally through summer training. What is scary is that many players are either in their prime or yet to reach the summit. Gawn, Christian Petracca, Steven May, Jake Lever and Clayton Oliver are elite. Then there’s James Harmes, Angus Brayshaw and Viney. Kysaiah Pickett and the off-contract Luke Jackson are only scratching the surface. If the Demons maintain their unselfish disposition, there may be no stopping this side.

What’s the match-up we want to see?

There’s nothing better than two midfield bulls going head to head, so hopefully Marcus Bontempelli and Christian Petracca line up on each other at the centre bounce and engage in battle at stoppages around the ground. Remember, it was a Bontempelli snap that gave the Bulldogs a 19-point lead in the third term at Optus Oval, only for that to be erased in the blink of an eye. Norm Smith medallist Petracca was central to the comeback (the Demons dominated the clearances 44-33 and centre clearances 19-11 overall). Watching hard nuts Viney, Oliver and Liberatore go at it is always entertaining. Can the Demons quell Jack Macrae? The likely match-up between Steven May and the pack-marking Aaron Naughton will also be must-watch. Naughton was No.2 for forward-50 contested marks last season but the absence of Josh Bruce hurts. The Demons’ back line has been weakened by injuries to premiership trio Harrison Petty, Trent Rivers and Michael Hibberd. 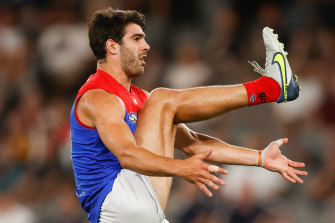 Can the Bulldogs tame Gawn?

That may be impossible. Arguably the league’s premier ruckman, Gawn averaged career highs for disposals (18.5), contested possessions (10.7) and marks (5.2) last season, and there’s no reason to suggest he won’t have another stellar year. Gawn, who had the game of his life against Geelong in the preliminary final, had 21 touches and 30 hit outs in the grand final. Veteran Stef Martin and the lean Tim English combined for 30 hit outs. The robust Martin, should he play, will again look to work his former teammate over, while English has added muscle over summer and physically appears more equipped for the frontline role.

Tip: Melbourne by 2 points. Click here to see how the rest of our experts tipped.

On Wednesday, follow our live blog of the season-opening grand final rematch between Melbourne and the Western Bulldogs from 6pm with Roy Ward, before Thursday’s Carlton v Richmond clash. This is your home for analysis of all the big moments; stick around afterwards to see what the coaches have to say.