With the Brisbane Lions missing Eric Hipwood and Dan McStay through injury, exactly how much will fall on the shoulders of Joe Daniher this weekend against the Western Bulldogs?

Lions coach Chris Fagan would prefer not to look at it that way. “We play a system,” he says. “We have the highest average number of goalkickers per game, we’ve had a lot of guys that have kicked 15 or more goals this year. We’ve never been reliant on any one source.”

But Daniher’s individual contribution can’t be ignored either. If anything, his extraordinary rebirth at the Lions after his last three seasons at Essendon were ruined by injury has been undersold.

He hasn’t missed a game, a testament to the club’s medical and fitness staff. And he’s kicked a goal in all of them, bar one: last week’s qualifying final against Melbourne. In total, he’s kicked 45 goals and 35 behinds. He’d kicked 18 from 15 matches in the previous three years.

The question is how to best support him. McStay and Hipwood are not world-beaters, but adding Daniher took pressure off all three players, who could interchangeably play deeper or push up to the wings as link players. 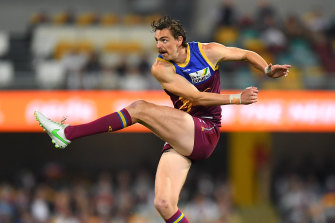 The result was McStay and Hipwood enjoying career-best seasons, while Daniher didn’t have to worry about being the main target in attack every week. Nor did Cameron, who had essentially been playing as a small full-forward, an unsustainable option.

The Lions have been an infinitely more flexible and dangerous team as a result, and Fagan admitted being forced to reshuffle their line-up had taken up much of the Lions’ match committee deliberations at the selection table this week.

“It’s not a problem that we’ve ever had before. Eric Hipwood and Dan McStay have been pillars of our forward line ever since I’ve been at the club, so it’s not like it’s a common problem we’ve had to solve before,” he said.

“It’s been our topic of conversation all week internally – do we go small and play Keidean Coleman up there; do we move Marcus Adams out of the back line? He’s played forward for us before, and as a WAFL player.” 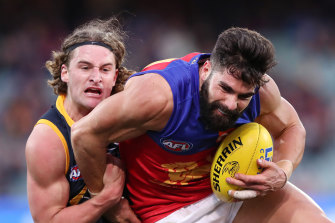 Marcus Adams is one candidate to push forward for the Lions.Credit:Getty Images

The Lions have brought tall defender Jack Payne into the side. Payne is strong in the air and has most recently filled in when Adams has been injured. This suggests that Adams is the most likely to be swung forward to link up the ground.

After McStay was lost early to concussion, that link was sorely lacking against Melbourne last week. The Lions struggled to take a contested mark all night, losing connectivity between half-back and half-forward.

Fagan suggested another wildcard – throwing dual All-Australian Harris Andrews forward – but he was surely throwing sand. Andrews is more likely to be focusing on tightening up his defensive game after having his colours lowered last week.

“We did not defend the ground well on Saturday night. It was too easy for Melbourne to go from one end of the ground to the other, particularly in the first half, so we’ve spent a lot of time on that this week,” Fagan said.

“I generally find that if our defensive game is on, then everything else falls into shape. That’s not to ignore the fact that the contested ball game’s pretty big against the Dogs, but it’s a strength of ours as well.”

‘Horror’ as NRL clash gets ugly