Penrith officials were left stunned on Saturday by video footage of a Canberra trainer getting involved in Friday night’s second-half melee.

The 65th minute incident is certain to attract the interest of the NRL. 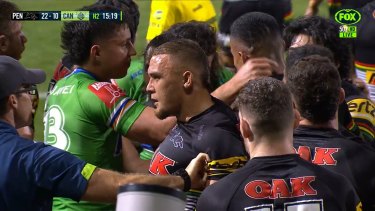 Penrith only realised what had happened when they went back over the footage on Saturday morning after Crichton was charged with contrary conduct for sparking the melee. He will be fined $1350 with an early plea and be free to play against Brisbane on Thursday.

When asked about the incident, NRL head of football Graham Annesley said: “All matters that arise out of the weekend’s games will be looked at on Monday following the round, and it’s not appropriate to comment until we’ve reviewed those matches.”

Penrith great Royce Simmons was at the ground with the 1991 premiership team enjoying the 30-year anniversary celebrations of the club’s first premiership win and said it was not a smart move to single out a player such as Fisher-Harris.

“It’s a pretty silly decision made by him in what would have been the heat of the moment,” Simmons said. “And the last bloke I’d be pushing is James Fisher-Harris. He scares me just shaking his hand.”

Formal warnings and fines are available to the NRL for any trainer who is seen to cross the line.

Canberra and Penrith are developing a strong rivalry with their past few contests featuring plenty of spite. There were a couple of other melees during Friday’s 30-10 victory by Penrith, including Hudson Young shoving Viliame Kikau after he had collected Jordan Rapana on the ground.

The Panthers received a penalty because of Young’s actions, which proved a big turning point in the first half.

Coach Ivan Cleary was proud of his young side for not taking a backward step in the heat of battle and said after the game: “That’s what you want from them [not backing down]. It was a pretty untidy game at times, the rucks were really slow – I felt there was a bit of spoiling going on – but you have to deal with that.”