Geelong coach Chris Scott has promised to some different things against Richmond on Friday night as they attempt to topple the reigning premiers for just the second time since 2017.

The Cats are “still trying to crack the code” to beat the Tigers, said Scott on Wednesday, with the main difficulty in the execution of plans to defeat them, rather than creating one. 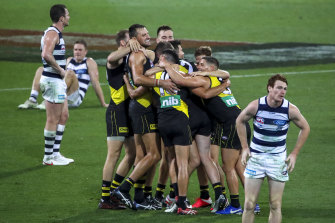 To the victors go the spoils: Richmond celebrate victory in the 2020 grand final over the Cats.Credit:Glenn Hunt

The Cats led the Tigers at half-time in last year’s grand final before being overrun in a similar fashion to the manner in which they lost the 2019 preliminary final.

“We will try some different things, there is no doubt about that,” Scott said.

“We have taken some calibrated shots at them but haven’t quite locked on the target right at the moment but that is part of the code we are trying to crack.”

The Cats will be boosted with the return of forward Shaun Higgins, who is likely to play after missing four games with a fractured thumb and hamstring injury, and will have recruits Isaac Smith and Jeremy Cameron in their line-up for the first time against Richmond.

Tigers coach Damien Hardwick acknowledged on Wednesday that changes in personnel at the Cats would present them with a slightly different challenge on Friday night compared to previous encounters. He said victory would be decided by systems, rather than individual efforts.

“Whichever system is strongest for longest, that will actually get the result,” Hardwick said.

Richmond are likely to recall Martin after he missed last week with concussion and defender Nick Vlastuin, who has been missing since round one, but they will be without defender Dylan Grimes, who played a significant role in the Tigers’ win over the Cats in round 17 last season, and their skipper Trent Cotchin (hamstring).

Richmond have won six of their past seven against Geelong and will head into the match favourites.

“They are clearly still the benchmark even with some important players out and being able to show the system stands up,” Scott said.

“You have to give yourself a chance. If you hand the game to them and play the game the way they want it to be played no one can go with them.”

Scott also paid tribute to former club president Frank Costa who died on the weekend aged 83, saying he laid strong foundations for success at the club and in its culture.

‘I just kept on drinking my blood’