Geelong failed to get out of second gear against lowly North Melbourne in Tasmania, but the Cats did enough to maintain their buffer inside the top two on the AFL ladder.

In a match reminiscent of Geelong’s ugly win over Carlton in round 17, neither the Cats or Roos really made the most of their opportunities until Coleman Medal contender Tom Hawkins – who had been kept goalless to three-quarter-time – sealed the 20-point win with a brilliant set-shot goal from the boundary late in the match. 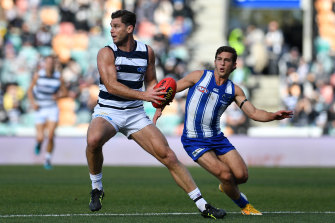 Tom Hawkins on the move for the Cats in their clash with North Melbourne at Blundstone Arena.Credit:Getty Images

The Cats, overwhelmingly, registered 60 inside-50s to the Roos’ 34, but inaccurate kicking and wasteful entries left the door ajar for most of the afternoon.

North Melbourne played patiently, possessing the footy with a kick-mark game that kept the match defensive and relatively uncontested. They took 126 marks, well above their average this season of 99.9, while the Cats also exceeded their average of 102.9 marks, taking 136 of their own, highlighting the style of footy played in front of a sold-out Blundstone Arena.

Eddie Ford, who had two goal-scoring opportunities in the third term, kicked his first career goal midway through the final term that put the Roos within 12 points and when Luke Davies-Uniacke streamed from the very next centre bounce, he had the chance to cut the margin back to one kick. But the shot on goal failed to make the distance, leaving the Cats with a manageable lead and a ticking clock. 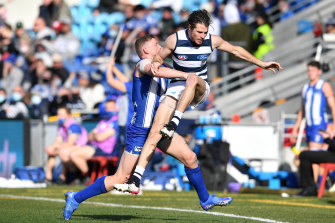 When Hawkins, who had been well held by Ben McKay on the small Tassie field, kicked truly with five minutes left on the clock, the Cats held an unassailable 19-point lead.

Patrick Dangerfield (21 disposals, four clearances), who had just one touch in the third term, lifted in the final stanza, while the Guthrie brothers Zach and Cam were among their side’s most prolific, with 28 disposals each.

Defender Zach Guthrie, who was a late inclusion in the side for Tom Atkins (back soreness), took 13 marks and looked very comfortable back in the senior side, while fellow defenders Tom Stewart (24 disposals, 13 marks) and Zach Tuohy (26 disposals, eight marks) were as sturdy as ever. But it was the Roos who really felt their outs.

With Ben Cunnington (tumour), Tarryn Thomas (concussion) and Cam Zurhaar (shoulder) all out of the team, the task was left to too few. Aaron Hall (35 disposals) and Jy Simpkin (29) had the most disposals, but the Roos lacked firepower in front of the ball.

The win was Geelong’s fifth on the trot, and their 11th of their past 12, guaranteeing their spot in the top two for another week.