Michael Cheika wants to offer valuable insights and analysis but says he will refrain from judging or criticising the game’s character on or off the field during Nine and Stan Sport’s rugby coverage this year.

After five years in charge of the Wallabies, one of Australian rugby’s most polarising and passionate figures has taken up a fresh commentary role alongside another highly opinionated figure in former Wallabies great David Campese. 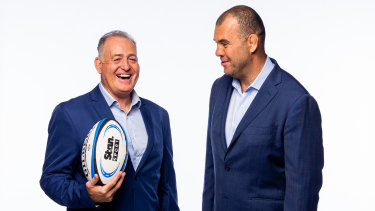 Cheika will continue his role as head coach of Lebanon’s rugby league team and feels he has plenty to offer behind the microphone, having made a handful of UK appearances in recent years for BT Sport and the BBC.

Few would have predicted Cheika to pop up in the media once his coaching days were over, however the man who helped the Wallabies to a World Cup final in 2015, assures his latest career move is driven by personal development and a desire to see the code flourish.

Chieka copped plenty of criticism during his time as Wallabies coach, but doesn’t plan on dishing out fire and fury when behind the microphone.

“I think the less judging that goes on while people are on TV or in the media in general the better. That might be the domain of others,” Cheika told the Herald. “For me it will be giving those who are watching a better experience of the game because we want the game to be popular and people to watch it, the ups and the downs. 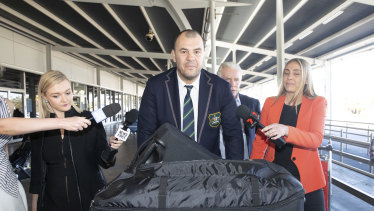 “I can’t see myself on the microphone asking questions but giving people who are watching the game a different view on the game and insights into what might be happening in the background and on the field.”

Cheika will be in Nine’s Sydney studios on Friday night for the season opener between the Waratahs – the team he coached to a Super Rugby title in 2014 – and the Reds.

Having been Wallabies coach for the most recent World Cup campaing in 2019, Cheika hopes to provide a unique perspective on Super Rugby, and if he’s commentating on Wallabies matches later in the year.

“[If a] footy player walks out on the field looking not to play well, I know that. I know that from the inside,” Cheika said. “The guys here at Stan and Nine want a really authentic coverage. I don’t think they want commentators guessing on what’s going on or what could be happening or even judging. That’s for others in the performance side of the game. It’s about explaining the game and what could be happening to the viewer, not commenting about the player.

“If I’m lucky enough to sit in on a match that Australia is playing, there’s two teams that we’re talking about. What I think I can give to viewers is an explanation of what people could be thinking, even with the stuff that doesn’t eventuate.

“Often coaches or players want things to happen and they don’t happen because the opposition gets in the way of that. It’s more sometimes about what doesn’t happen.”

Cheika has recently been an assistant coach at the NRL’s Sydney Roosters and helped Argentina’s rugby team during their Tri Nations campaign last year in Australia.

Campese, a Rugby World Cup winner and Australia’s most prolific try-scorer, used to work for Super Sport in South Africa and is excited by the opportunity to be behind the microphone again.

“I’ve always wanted to be in rugby,” Campese said. “I just think I’m old enough now to understand the game pretty well and just try and give a different aspect. Over the last couple of years I think the game has been neglected in knowledge of the game. I’m not saying the guys who have been there don’t know the game but I’m a bit different.

“Cheika and I have been mates for donkeys through Randwick. He came to Italy and coached. We catch up all over the world.”

McGrath re-signs with Bombers, Crows confirm Fantasia wants to move back to SA