It comes as Raelene Castle released another statement on Wednesday evening responding to criticism over why RA is yet to provide comprehensive financial details to the Rugby Union Players Association. 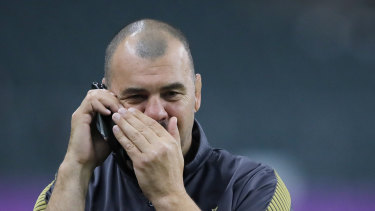 The relationship between Michael Cheika and Raelene Castle was non-existent by the time the World Cup was finished. Credit:AP

“In a time of crisis, transparency and communication are extremely important. This is where, from what I’ve heard from different players who I’ve spoken to, they’re not getting that.

“Other codes have laid their cards on the table. Some of them have copped a bit of a panning for it … at least there is a certain amount of transparency and I’m pretty sure that the players, when it comes to the discussion around pay cuts, with that information, they all know they’ve got to toe the line.”

In a statement relating to talks with RUPA, Castle said: “We believe the information we have shared, including information on future cash projections, provides the players with enough information to develop a position. We have entered the discussions with RUPA in good faith and look forward to continuing those discussions to reach an appropriate agreement under the current circumstances.”

Cheika then brought up the issue of executive salaries across all sports.

Castle has taken a 50 per cent pay cut, while it emerged on Wednesday evening Todd Greenberg would take the same cut as NRL players when an amount has been determined.

“One thing across the board that has been surprising – I’m not just saying this in rugby – is across the board about the tiering of wage cuts,” Cheika said. “I think in leadership you’ve got to give a direction and align people behind you. It’s pretty difficult when you say I’m going to take 60 per cent, they’re taking 30 and you chaps are getting nothing. All in it together means we’re all in it together.

“If there’s more transparency then everyone says, ‘OK, yeah, we have got a problem and we all have to fix it’ because it’s important to do it. You can’t deny it and there’s no hidden measures.”

The former Waratahs coach was also asked for an opinion on how the future of provincial rugby could look. More local content was the response.

“I think no doubt that Australian rugby fans … would like to see more rugby in their time zone and the continuity of games for our supporters so they can see their players play every second or third week at home,” Cheika said. “Now you can go five weeks without seeing your team at home. How do you build a supporter base? It’s very difficult.

“I think having more games in our time zone would be [good].”

‘I will back it in’: Chris Scott supports anti-dissent rule, will try to curb frustration