Home » Rugby » Claire Molloy: Ireland and Wasps back-row on the coronavirus frontline with the NHS 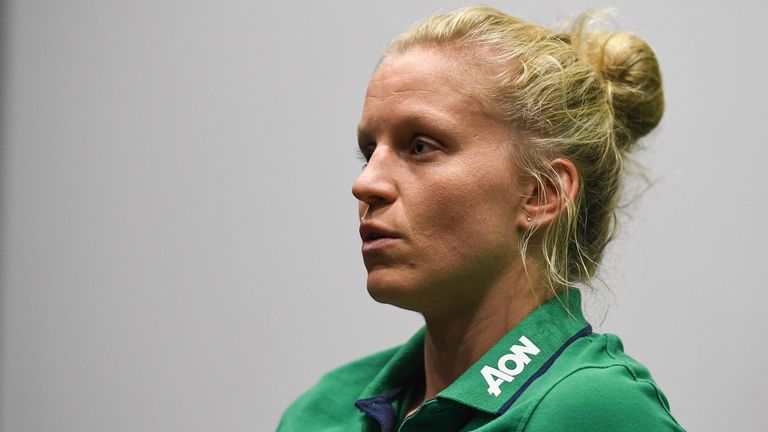 Rupert Cox catches-up with Ireland and Wasps flanker Claire Molloy – who is also an NHS doctor working on the frontline during the Coronavirus pandemic….

Molloy has been capped 69 times for Ireland, played in three World Cups, is a Six Nations Grand Slam champion, and was part of the first Irish side of any age or gender – ever – to beat New Zealand.

She has captained her country at World Cups in both 7s and 15s, and played for Bristol and now Wasps in the English Premiership. This, surely, would be enough for any of us to rest on.

But Molloy is more, even, than all this – not only an elite rugby player, and the woman described by the England coaching staff as the best openside flanker in the country – but also a doctor, and an Accident & Emergency doctor to boot, working on the very front-line of the NHS, where the fight against Coronavirus is a clear, present and unimaginable danger.

“Like wearing a giant crisp packet” – that’s how Dr Molloy describes the PPE equipment she now has to wear at University of Wales Hospital in Cardiff. ‘PPE’ – a medical acronym most of us have never heard, but for Molloy, now, an everyday reality: “We changed to a ‘corona rota’ on the 1st April. Two days on, two days off…we’re facing the unknown – gearing up to prepare for a surge in cases.

“But there’s also a need to keep the non-corona population protected – maintain a clean pathway for them to come to us – heart attacks don’t take a break because of a pandemic!”

As gung-ho an attitude as you’d expect from a world-class flanker and emergency doc. Molloy continues, despite the fear and exhaustion that must be ever-present, to find positives in the coronavirus chaos: “In a way we’re privileged…I get to see people at work when most people aren’t able to do that at all…there’s a huge degree of normality for us.”

Molloy’s extraordinary rugby career, it turns out, only came about by chance. After failing to win a place at medical school in her native Ireland she attended a uni open day – and the course of her life in medicine and rugby changed: “The Welsh lot seemed nice, so I applied and found out later I got in.

“Rugby wouldn’t have happened without Cardiff…it was the perfect opportunity to give it a go.” And give it a go she certainly did. Molloy sat her medical finals having just returned from a particularly tough Six Nations game against Italy, to find herself in the same exam room as Wales and Lions star Jamie Roberts.

“I had half my face grazed off. He probably wondered who that Irish woman was who looked beaten up, and really tired!

“I was heading off to Hong Kong for the 7s Series after the exams and Jamie ended up on the Lions tour to South Africa. He got player of the series I think…”

Balancing elite international rugby and medical training has clearly not been without its challenges, but the support of Ireland Rugby and some very understanding club coaches has allowed Molloy to follow both paths with passion.

“I’ve been lucky to be in a very supportive working environment. Ireland let me have the sabbatical [to concentrate on my studies]. Wasps have been very supportive too. Giselle [Mather, DOR at Wasps] has been very forgiving and accommodating”. 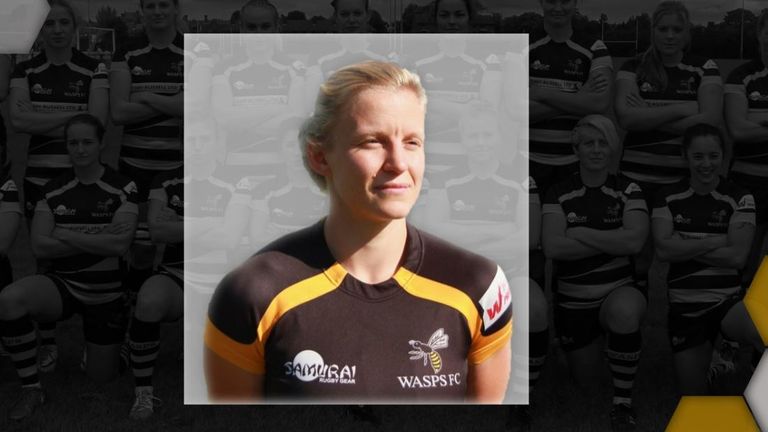 Mather, in turn, has this to say of her player: “[She] is an extraordinary person. She wants to look after people when people get injured or unwell. On the field – she sometimes can’t switch off when a player is in need.”

Once or twice, a player has been in need due to a devastating Molloy tackle – it has meant she has found herself both the cause and the remedy, not the usual role for either a doctor or a rugby player!

She remembers: “I tackled Sioned Harries and just knew something bad had happened. I found it hard to leave her.

“I remember meeting her mum a couple of games down the line, the last game of the Six Nations, and being quite terrified because I’d done quite a serious injury to poor Sioned that had ended her Six Nations. And saying to her mum: “I’m really sorry!” and her mum saying: “I’m just really glad you stayed with her.” Phew…but I still felt awful.”

Often living miles away from her club base, Molloy is now used to preparing herself far from the rest of her team, so she can be close to whichever hospital she’s attached to at the time.

“Prior to playing at Wasps I spent nine years at Bristol making one session a week, and doing all my own training – it’s not a unique situation for me to be in, training alone, just getting my head down, get my sessions in – tapping into Wasps and Ireland S&C coaches. Being inventive!” She’s currently on an agreed break from Ireland duties to focus on her emergency medical training – but with a potential fourth World Cup appearance in 2021, Molloy plans to dive head and heart first back into Test rugby if given the chance later this year…

“I’ve chosen my [medical] career first this year. It was a calculated risk to not be playing for Ireland, but from August onwards – rugby is my absolute focus.”

Her rugby highlight so far? Of course it has to be “the perfect day”, as she describes it – the historic moment when Ireland beat the Black Ferns at the 2014 Rugby World Cup in France, effectively knocking them out of the tournament.

It was an enormous upset; defending champs New Zealand were heavy favourites for a fifth straight title, but Ireland had other ideas: “Everything clicked. We just felt we knew we were going to do this. It wasn’t a hope or a wish; coming out of the tunnel we just had a good feeling about it.

“I remember facing the Haka, then coming together with the girls and Fi Coughlan used some very choice words – something about ‘let’s go mental!'” 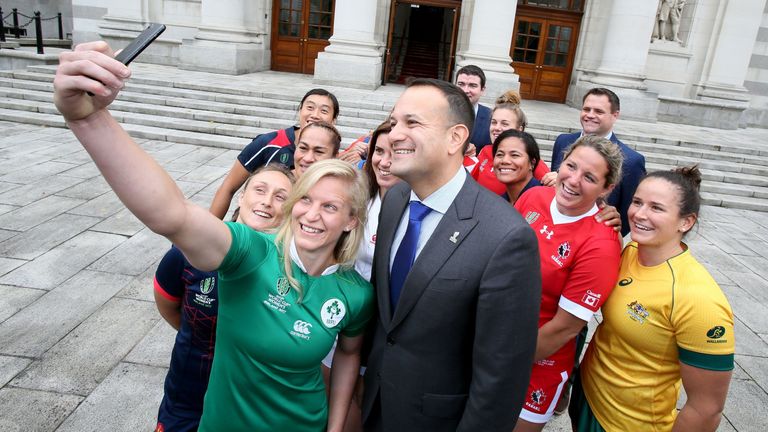 That one game set in motion a huge change in fortune for Irish rugby. It was as if Molloy and the Irish women had, at last, with their grit and talent, opened the floodgates.

Two years later the men’s U20s beat the Junior All Blacks. That same year the Senior team would reach their Everest – beating the All Blacks for the first time in 111 years – en route to becoming the No 1 rugby team in the world.

Molloy recalls meeting Joe Schmidt after the win against the Black Ferns: “I said ‘it’s your turn now!’ Thankfully he laughed. That could have gone really wrong! I was high on Coca Cola at the time, but we knew it was something special – we’d done something that no one had expected of us. It’s a great underdog story”. 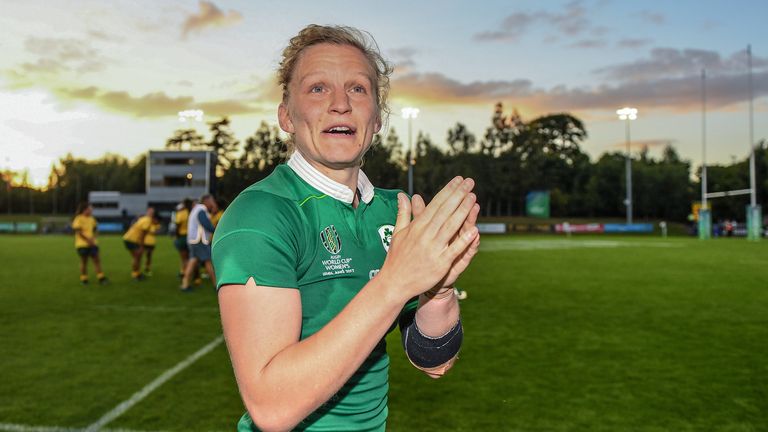 Talking to Molloy, it’s difficult to think of her as any kind of underdog. Irish rugby heroine, medical heroine. She opens up more on the ‘twilight’ shift at the hospital to come in the evening. That’s 2pm till midnight. And you can be absolutely sure she’ll get some rugby training in somehow.