James Maloney plans to remain in France for at least another year – and potentially playing domestically – before setting his sights on coaching in the NRL.

One of the game’s most popular players announced overnight he would retire at the end of the Super League season. 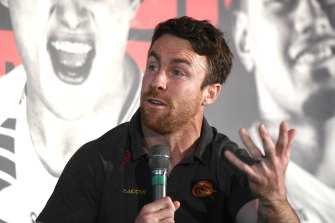 Jimmy Maloney would love to become a coach in the NRL after he retires.Credit:Getty

The 35-year-old two-time premiership winner who played 247 NRL games, 14 Origins for NSW and three Tests for Australia is hoping to guide French club Catalans to their first title.

Catalans, who are on top of the Super League ladder, had an option in their favour for next season, and wanted to take it up, but Maloney made a point of letting the club know now so they could plan accordingly.

Maloney told the Herald he reached the decision a month ago, and a big reason was the thought of not wanting to do another pre-season.

He also plans to turn to coaching rather than commentary, especially after getting his first taste of educating younger players during his time at the Panthers. 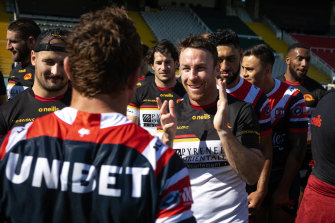 “I made the decision about a month ago,” Maloney said.

“This pre-season wasn’t a hard one, it was one of the easiest I’ve done, but it was the first time it became a drag for me, and it had a different feel about it.

“It made me start thinking about things. I love playing games, I love game day, but the training is a bit the same, and my head isn’t in it.

“The moment I decided to retire I haven’t thought about it again, I haven’t second-guessed myself, which tells me it was the right call.

“I want to go into coaching when I get back, but I’m not in a rush to get back.

“I’ll stay over here for a year or two. The family are enjoying the experience. To travel Europe and show the four kids, it’s an unbelievable opportunity.

“When I was at Penrith I realised I would enjoy getting into coaching, the young kids would look to you for advice, and then you’d get a kick out of watching what they do. It’s been the same here with the young French kids. 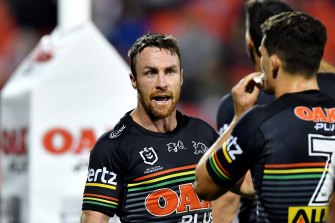 James Maloney realised he wanted to get into coaching while at the Panthers.Credit:NRL Photos

Maloney said it was common for players in France to join the domestic competition after retiring from Super League, to help ease them out of professional sporting life.

“Playing in the local competition is an option, and that way you’re weaning yourself off rugby league rather than going from playing to nothing,” he said.

“And the French comp plays through the winter here, so you get summers off. That way you can travel Europe in the summer. That would hardly be a struggle.”

Told he could potentially pitch up to be Trent Robinson’s assistant with France for next year’s World Cup, Maloney quipped: “Maybe. Or maybe I could be his assistant at the Roosters in a couple of years.”

Maloney has always been one of the game’s larrikins. He once famously tried to convince his wife Jess to redraw $100,000 on their mortgage so he could back champion mare Winx.

He won the 2013 title with the Roosters, then another premiership three years later with Cronulla, and said he now wanted to help Catalans win the Super League, especially for owner Bernard Guasch.

Guasch made sure the Catalans players hardly missed a pay cheque during COVID, and Maloney went as far to say no other league players in the world had been looked after so well.

“What Bernard has done has been extraordinary, he’s been unbelievable for myself and the boys, and the best way to repay him is with a championship,” Maloney said.