Collingwood battled to a 10th consecutive victory, and are the first side to win nine games by under 12 points in a VFL/AFL season, with a hard-fought win over Port Adelaide under clear skies at the MCG on Saturday afternoon.

The six–point nail-biting win in front of a passionate crowd continues the Magpies’ fight for a top-four finish despite a tough run home, in which they face fellow top-eight opponents Melbourne, Sydney and Carlton. 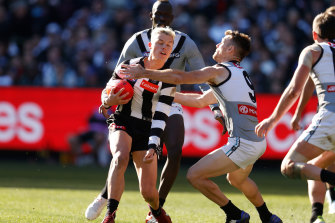 But they’ve shown they can come from anywhere – notching six of their last 10 wins by a goal or less.

The defeat leaves Port Adelaide firmly outside finals contention, as they needed the win for an unlikely but possible September appearance.

The Magpies have come from behind at the third quarter in their last four games but put themselves in a much more comfortable position on Saturday, holding a 17-point lead heading into the final term.

The Power threatened in the final minutes but Pies fans breathed a sign of a relief as the final siren confirmed another close win. 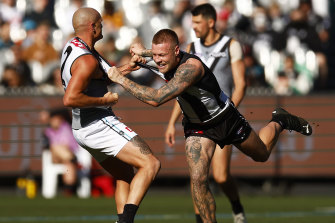 Throughout the game, it was their ability to find space, hold the fort in defence and boast some creativity in front of goal that put them the Magpies ahead, while Port’s poor defensive positioning let them down.

Collingwood gave away two off-the-ball 50-metre penalties from too much aggression in the opening term, one before the first bounce and both gifting Travis Boak with goals for Port.

There was also plenty of back and forth on the scoreboard, Port Adelaide finishing the first quarter 12 points ahead, before Collingwood took the lead late in the third off the boot of Jack Ginnivan, putting them five-points in front at half-time.

Then 20 seconds in the last, Port Adelaide put themselves back in front with a goal from Zak Butters before Collingwood took back control, which they held to the finish.

Ginnivan had the home crowd on their feet as he had three potential high tackles called as holding the ball against him. However, he proved he’s more than just the tackling controversy, booting three goals by half-time, assisting in a goal from Darcy Cameron and having a strong impact on play. 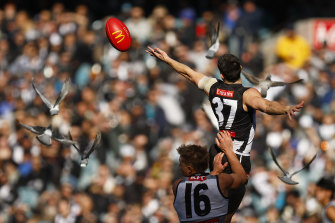 Jordan De Goey had a busy game for his first back from a quad injury, registering 23 disposals, second in contested possession on 13, behind Darcy Byrne-Jones, and booting two majors.

Scott Pendlebury was ever-reliable, directing play and winning the score involvement count alongside Boak at eight, while the Daicos brothers were both influential in defence.

This was while Connor Rozee and Darcy Byrne-Jones got to work winning the ball for Port Adelaide around the stoppages and around the mid, aided well by Xavier Duursma and Butters. In fact, five Port Adelaide players led the disposal count, but Collingwood were just more efficient with the ball.

Taylor Adams was subbed off with a groin injury at half-time, with medical sub Josh Carmichael coming on to replace him. He had an immediate impact and booted a goal in the final term.

Jeremy Howe went down to the rooms during the final quarter and didn’t return due to a quad injury, and Isaac Quaynor struggled with a sore hand.