Nathan Buckley believes besieged Collingwood’s hard-fought five-point win over Adelaide should provide “about five or 10 minutes” respite from the off-field civil war that has engulfed the club at board level.

With the backdrop of a protracted power battle between president Mark Korda and challenger Jeff Browne, Buckley was able to successfully manoeuvre the gaze of his playing group away from any higher-level distractions and towards the job at hand. 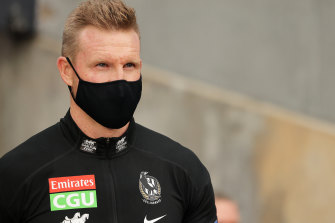 “There’s still obviously the united aspect to come from that (board rumblings) in some shape or form,” Buckley said.

“But that’s at a level beyond where the players and coaches are focusing on right now.

“Our jobs are to prepare and try to execute as best as we possibly can.

“We are asking some of our young boys to come in and play before acceptances in many ways.”

Saturday was one of the longest days these Magpies will endure in their careers.

All were tested for COVID-19 in Melbourne on Friday before setting their alarms super-early Saturday morning and flying to SA, undergoing a second test, spending hours of downtime hanging around Adelaide Oval’s indoor cricket nets awaiting the results, receiving the all-clear to play – and play well – before returning to Tullamarine the same evening.

And that came after Collingwood underwent 60 hours of hard lockdown enforced by SA health officials to enable the fixture to proceed.

“The lockdown in Victoria was not the most difficult part,” Buckley said.

“Breakfast was at 6am and we were on a 7.30 bus from our hotel … the most difficult part was we were tested in Victoria on Friday and tested again when we landed in SA.

“The reason we had to come over earlier was for everyone to get a negative test when we landed in SA.

“We sat around the SACA indoor nets for three-and-a-half hours, had a feed, the boys were having walks and stretches periodically … there was a fair bit of downtime.

“When we got to the change-room at 2.00 it was normal preparation after that.”

Comeback king Jamie Elliott was the difference between the two sides, bagging a career-best six goals without a miss to complete a Hollywood-scripted return to action after missing 10 weeks with a fractured fibula.

“His talent is unquestioned and we’ve missed his smarts in front of the ball,” Buckley said of the dynamic Elliott.

“To be able to have that sort of impact coming straight back, it’s a credit to him and our medical and fitness staff.

“Even late in the game, to kick the winning goal (was) clearly a pretty impressive performance.

“We were able to kick straight and there’s no doubt a smart player in front of the ball helps that.

“It makes us all look a bit better when we’ve got that type of capacity on the receiving end of kicks.“