Round four of the AFLW season featured the first Dreamtime match in the AFLW, veteran Sabrina Frederick stepping up in the ruck and Carlton with another draw. Here’s what we learnt.

Monique Conti ‘without a doubt’ the best in the comp 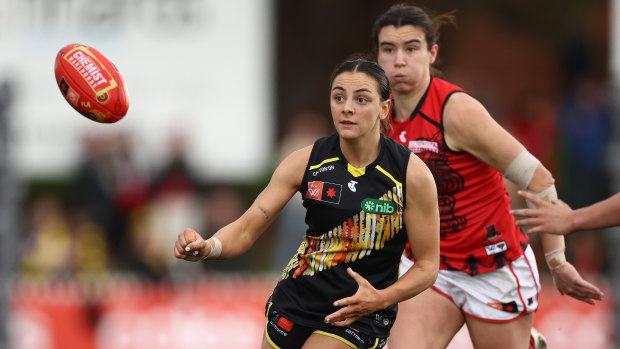 Monique Conti played a starring role for the Tigers against the Bombers.Credit:Getty Images

Richmond’s Monique Conti was prolific in her side’s two-point win over Essendon at North Port Oval on Sunday afternoon in the first AFLW Dreamtime match on the second weekend of the Indigenous round. It was a tough arm wrestle in wet conditions, which made for some chaos footy, and Conti shone through with her composure and clean skills.
Carlton coach Daniel Harford declared on Fox Footy’s commentary that Conti was “without a doubt” the best player in the competition right now. Her use of speed, bodywork and clean, crafty possessions does make a case that’s hard to argue with. The league best-and-fairest favourite also had an incredibly impressive one-hand gather and snap from the pocket to open the second half. She’s particularly lethal alongside impressive onballer Ellie McKenzie, and Sarah Hosking, who did an impressive job on the weekend at keeping prized Bomber Maddy Prespakis to just 11 touches. Tigers skipper Katie Brennan was also fierce in attack, back for her first game this season after being sidelined with a footy injury. Still, she didn’t register a goal, ending her streak after 15 consecutive games with a goal.

Carlton with a rare second draw in a row

Carlton are climbing the ladder two points at a time after recording a draw for the second week in a row, this time against the Dockers on Saturday afternoon at Fremantle Oval. It was an impressive comeback from the Blues, who entered the main break three goals down and on the back foot after losing crucial players Phoebe McWilliams (with an ankle injury) and Amelia Velardo (with concussion).
The Dockers controlled the first half, particularly the territory, yet couldn’t maintain their dominance in the second as the Blues found a spark under pressure and kicked three final-quarter goals. The Dockers almost snatched a win as in-form forward Aine Tighe had a set shot on goal in the dying minutes of the game, but it was a wayward kick that levelled the score instead. The Blues’ defence held up well against an attacking Docker side to not concede another point, and thus the game. Given the second half counter-attack, Carlton senior coach Daniel Harford said he was “so proud of the team” despite the flattening back-to-back draws. Last week, the Blues finished up level with Port Adelaide at Ikon Park. “I thought we coughed one up last week and got the draw, whereas this week we were steaming home and we were the better team,” said Harford post-game. “So, I think the conversation is very different…this was a draw of real grit and character and spirit. And I don’t think in my five seasons I’ve seen that level of performance under so much pressure and duress from one of the Carlton groups. So, I’m enormously proud of what they showed today.”
Harford praised Fremantle’s “positive and really powerful” slingshot attack in the first half, saying it made it difficult for the Blues to get any flow in their game. “Every time we got the ball, Freo stopped us,” said Harford. “So, we had to find a way to get past that, so we put a number behind the ball in the second half, not as a defensive mechanism but to create some run and flow – and it worked.”
This game was another example of Carlton performing well under pressure, as the side often finds momentum when in trouble or in the later half of the season when finals are out of contention. Perhaps a ‘nothing to lose’ mentality will help them find their first win of the season. Fremantle, similarly, are without a win yet this season. Carlton have a huge challenge ahead of them with Melbourne next week at Ikon Park, while Fremantle take on the West Coast Eagles at Optus Stadium.

In league champion Erin Phillips’ 50th game, she captained Port Adelaide to their first win in AFLW history with a huge 66-point thrashing against fellow expansion-side Sydney at Alberton Oval on Saturday.
Phillips – along with fellow former Crow Ange Foley – has been a pillar of leadership, composure and control when fighting to get games back on her side’s terms. But the real spark of the side has come from its emerging young guns. Against Sydney, 18-year-old Hannah Ewings got to work at the coalface, finishing with nine clearances and 19 disposals, and did some real damage on the scoreboard with three majors. She was joined by fellow onballer 20-year-old Abbey Dowrick, who finished with a game-high 24 disposals, 14 tackles and three clearances, and 21-year-old Jacqui Yorston, with 15 disposals, 13 tackles and three clearances. Despite Sydney being held goalless – and winless – credit is due for No.1 draft pick Montana Ham, who returned after a knee strain suffered in round one, and had 20 disposals (the most for her side), four marks and five tackles. Ally Morphett was another bright spot for Sydney, challenging Port Adelaide’s Olivia Levicki in the ruck and finishing with 20 hitouts. While Essendon have claimed the most wins of an expansion side this season with two (Hawthorn and West Coast), the Power have showcased their competitiveness and threat within the competition, especially for a first year team. Last weekend, they drew with inaugural side Carlton, who has six extra seasons on them in the competition. Port Adelaide next play the Gold Coast Suns at Bond University, while Sydney will be hunting their first win as they take on fellow-expansion side Hawthorn.

Frederick found a new gear in the ruck

Adelaide re-asserted their top-tier positioning after claiming a five-point win over Collingwood at Victoria Park on Sunday. But despite the loss, the Pies can take away a huge positive in the performance of veteran Sabrina Frederick’s work in the ruck. She finished with a game-high hit out count of 19 after showcasing a relentless workrate. Over her past six seasons at three clubs, the 25-year-old has become best known for her marking in the forward line. Last week against Geelong, in her 50th game, she was a strong point of attack during the first half of the Pies’ close win against the Cats, presenting well and being rewarded with two set shots on goal. Her main impact, though, was when she moved herself into the ruck, finishing with 11 hitouts, the third-highest of the game.
Collingwood coach Steve Symonds clearly didn’t mind what he saw as he named Frederick in the ruck against Adelaide, where she ended up having an outstanding game. Throughout the match she was a constant headache for Adelaide, denying goals as the last line of defence for her side, and forcing turnovers with her intercept marking. At a press conference before her 50th game last week, she told media: “My game has changed a lot since the first year. My role has definitely changed as well, playing a bit more ruck than I ever have been. I’ve really enjoyed that challenge and giving Al Downie a bit of chop out as well in our team … Although at the start I was just a forward, I think that now it has added a strength to the bow, and I’m really looking forward to take that role as that key forward, and a ruck as well.” 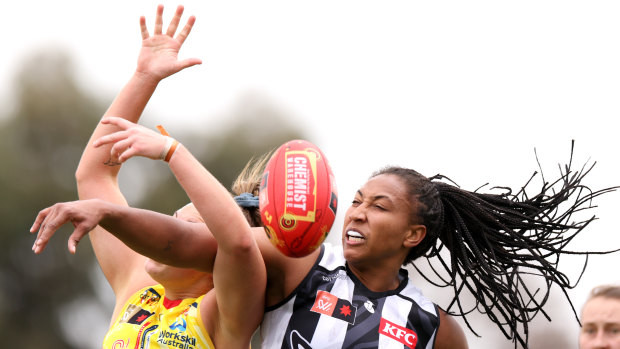 In what was touted as the grand final preview, the Brisbane Lions defeated Narrm by 15 points at Casey Fields on Sunday and cemented themselves as the ones to beat this season. They now sit comfortably at the top of the ladder with a whopping percentage of 321.7 – equal on points with the Western Bulldogs, whose percentage is 184.3. The Demons got off to an early start with three goals in the opening term, two from exciting forward Kate Hore, and they held the lead with the Lions trailing until just under five minutes into the final term. Then winger Sophie Conway had a brilliant goal from the back of a pack near goal and, from there, the Lions were away with two more majors from Courtney Hodder and Ruby Svarc. In the end, they had six contributors on goal, including Jesse Wardlaw with two. A lot of Brisbane’s dominance comes from their engine room – Ally Anderson (22 disposals) and Emily Bates (16 disposals) are undeniably classy ballwinners – but also their attack and use of space, especially in the final quarters.
When other teams tire, Brisbane kick into gear, their legs somehow finding new speed and making them almost impossible to stop. Now they have beaten the flag favourites, their next big challenge comes in round eight when they take on reigning premiers Adelaide – and there’s a good chance they’ll humble Richmond, Essendon and North Melbourne on their way there. The question for the competition now hangs in the air: who can stop this fierce and polished side?