Damien Cook says he is entitled to free booze at Northies for the rest of his career after helping deliver his best mate Dale Finucane to Cronulla.

“I get my free beers whenever [coach] Craig Fitzgibbon is up there,” Cook said. “That’s the least Fitzy can do for me after the year the Sharks and Dale have had.”

Cook jokes about being entitled to the six-and-a-half per cent commission most agents collect when brokering deals for players.

But he really did convince Finucane to seriously look at the Sharks when no shortage of clubs were in for his mate’s services, including St George Illawarra and Wests Tigers.

“I was biased, I wanted him to move to the Shire, but I also thought Cronulla would be a good fit for him – I thought he would really suit their team,” Cook said. 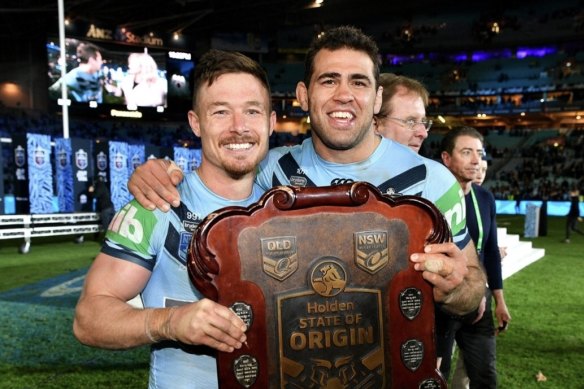 When asked about Cook’s input on his Cronulla move, Finucane told the Herald: “Apart from speaking to my manager and family, Cooky was the one person I rang about what opportunities I had.

“Both of us agreed the Sharks was the best place to come to. While I was in Origin camp, Craig Fitzgibbon was one of the Blues’ assistants and Cooky would always be in his ear about potentially signing me.

“Because I had spoken to Cooky so much about the Storm and the culture down there, and the fact Craig was coming from the Roosters where he had been their assistant and defence coach, we saw the similarities there. 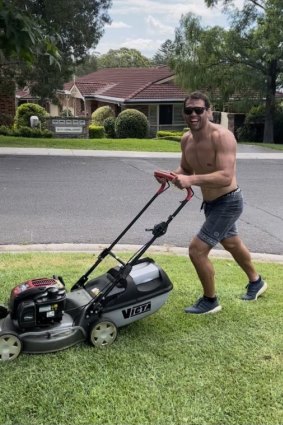 “With me being involved with Fitzy in Origin and the Country Origin team as well, we thought it was the best move.”

Cook and Finucane are very close, although they will be best of enemies on Saturday night when South Sydney and Cronulla meet in the sudden-death semi-final.

The unbreakable bond started in high school, reignited when they were both at Canterbury, and again for NSW.

Cook and Finucane, both 31, were born three months apart. Their eldest children were born four days apart – Finucane is godfather to Cook’s daughter, Willow – a week separates their wedding days, they holidayed together on the NSW south coast last summer, and they now live in neighbouring suburbs in the Shire.

When Finucane relocated from Victoria over the summer, he lived with Cook and would often mow his lawn instead of paying rent.

When COVID struck Finucane’s family, then Cook’s family a few weeks later, both players helped each other out with food and coffee runs.

“I love the fact he is now so close, he’s always been there for me,” Cook said.

“We met in high school, and I can still remember moving in together during our Dogs days. We lived together in a three-bedroom unit in Menai. Dale being the tight-arse he is, he got about five or six of us to live there at any one time, and broke the rent down to the dollar. I think I was paying $51 a week.”

The Cronulla forward was suspended when Cook and Souths went down in a golden-point thriller during the regular season. 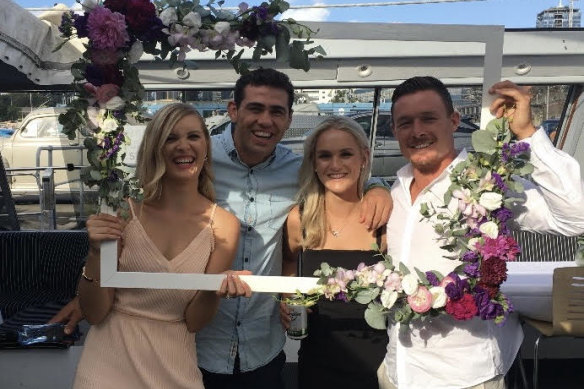 Dale Finucane and Damien Cook with their respective partners Maddie and Courtney.

“But when I have gone up against him when he was with Melbourne, Dale acts like he doesn’t know me on the field; he’ll look away and not answer me,” Cook said.

“Saturday will be tough. He’s played in enough grand finals – I’d like another crack at one. We’ll talk about the result either way at a family dinner next week.”

Finucane added: “Cooky is one of those guys who likes to get your attention before kick-off. He tries to find your eyes and give you a smile. I’m different. Even if your best mate is on the other side of the field, I like to keep it serious.”

The Sharks finished second on the ladder but Finucane knows it will count for nothing at Allianz Stadium.

Latrell Mitchell looms as the X-factor for Souths. The fullback missed three field-goal attempts against Cronulla in the regular season, which prompted him to start practising with his left and right foot this week at training.

“It’s no secret what a quality player he is, and while it’s one thing knowing what Latrell will do, it’s another thing trying to handle him,” Finucane said.