Trent Cotchin says this could be his last year as Richmond captain and is adamant there is a bevy of quality potential replacements at Punt Road.

Cotchin, who turns 31 next month, is entering his ninth season at the helm of the Tigers, a period that has yielded the club three premierships, including back-to-back flags in 2019 and 2020. 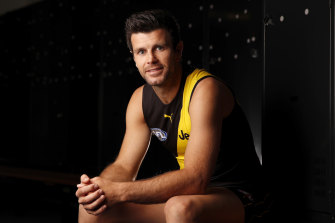 Shane Edwards, Dustin Martin and Riewoldt have also captained the side in Cotchin’s absence in recent years but Edwards and Riewoldt are both well into their 30s while Martin turns 30 later this year.

Nick Vlastuin has also been touted as a possible future captain.

Cotchin said this year could be his last as skipper.

“Maybe. I’m incredibly lucky, I’ve got an amazing lot of guys surrounding me that could easily step into the role that I play for our footy club,” he said at the AFL captains’ day on Wednesday.

“Each and every individual that walks into our footy club can be a leader in some way, shape or form, and we feel we create an environment that can allow them to do so.”

As the Tigers eye a third straight flag, Cotchin said Richmond were looking to enjoy the journey and did not see themselves as sitting ducks.

“I think the way we show up and play is effectively the hunters’ mentality. I think every time we go into a game, the opposition is exactly who we are trying to hunt down and take something away from, so our mindset won’t change from that point of view.

“What we have learned through both our challenging times, and also our good times, is that it’s the journey that brings most of the happiness.

“Right now we have a job to do, and the thing being a leader of our footy club, and I’ve obviously never been in any others, is that we have so many self-starters, so that makes our job really easy.”