Cape Town: Prop Wyn Jones admits it is a British and Irish Lions tour like no other without fans to roar on the side in South Africa, but said COVID-19 restrictions that have confined the squad to their hotel has brought them closer together.

Jones will pack down at the front of the scrum when the Lions take on world champions South Africa in the first of three Tests in front of empty stands at the 55,000-seater Cape Town Stadium on Saturday.

But rather than the pre-tour concerns over player boredom and mental fatigue, he said the squad have found ways to entertain themselves and formed strong bonds.

“It’s been different, but for us as a squad it has probably brought us closer together to be honest,” Jones said. “Being in the hotel much of the time, all together, we get on really well as a squad.

“Because of COVID we are probably closer than we would have been without it. So that is a strength for us.”

The scrum has been earmarked as a key battleground in the test series, and The epicentre of that will be the front rows. 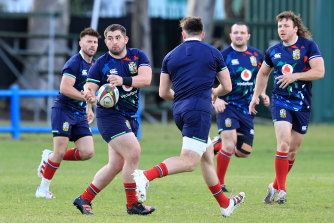 Welsh prop Wyn Jones during preparations for the first Test in Cape Town.Credit:Getty

Jones believes the Lions can take plenty of confidence with their dominant showing in the set-piece against a strong South Africa ‘A’ side last week.

“You know they are going to be strong in the set-piece, but that is something as a front-row forward that you relish and look forward to the challenge,” he said.

“We were quite happy with how the scrums went in that ‘A’ game. We stuck to our process and didn’t try to force anything. That has been a big focus in everything we do, stay disciplined and not give away penalties.”

The prop joked he is often mistaken for his Wales and Lions captain Alun Wyn Jones, but says he has learned to take it all in good humour.

“I get tagged on Twitter as the captain of Wales I don’t know how many times. I get a lot of requests if I can send a message or something as they think I am Alun Wyn,” he said with a smile.

“We have had a few [mix-ups] with the bags. His is ‘AWJ’ and mine is ‘WJ’, so we do get it wrong sometimes. Unfortunately we have not got mixed up with the hotel rooms, he is still in the suite and I am in the normal one.”