Cooper Cronk is convinced Cameron Smith has retired and it would take “kahunas” to play one more season after all the success he had enjoyed with the Melbourne Storm.

Cronk gave his view as Mal Meninga, the Gold Coast head of performance and culture, left the door open for Smith to join the Titans by backtracking from his quotes in a Queensland newspaper, where he said of the veteran hooker, “he won’t be with us, simple as that”. 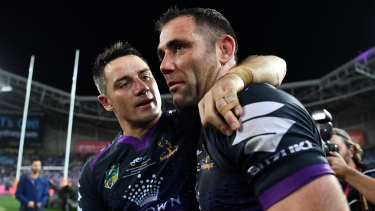 “We’d consider it [if he was keen],” Meninga said at the Fox Sports League season launch.

Cronk was straight to the point when asked about his former teammate’s next move.

Smith, 37, has kept the rugby league world guessing, including this week when a photo of him looking lean and surrounded by footballs at a Gold Coast park appeared.

“I think he’s retired,” Cronk said. “I have no mail so don’t read into that in any way, shape of form.

“But my personal opinion is he’s very proud of his contribution to rugby league with the Melbourne Storm and the game as a whole.

“It would take a hell of a lot of sacrifice or ‘kahunas’ to go out and play for the Titans after having achieved everything he did with the Melbourne Storm.

“I think he’s content. And why wouldn’t you be? You’re arguably the greatest player to have ever played the game, you’re content in life and you can go down to the Broadbeach Surf Club and have a beer and put your feet up and enjoy it.

“If he wants to play on he can, physically he’s able to – he finished top five in the Dally M last year – and everything says he could play on. But in my personal opinion I think he’s retired.”

Cronk, who won four grand finals with Smith – and whose friendship was strained once he left Melbourne to win two titles with the Roosters – said it would have been a “lay down misere” he plays on with the Storm had his family remained down south and not moved to the Gold Coast. 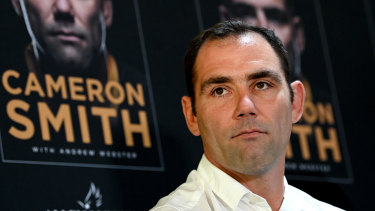 Will there be another chapter to Cameron Smith’s playing career?Credit:Getty

He was unsure why the announcement had dragged on and added of Smith: “He’s a smart operator and individual who knows exactly what he is doing 24-7.

“Just because he has a few footballs around him in a photo doesn’t mean he’s been running laps around the field. Maybe he was down there reminiscing about a few big goals he kicked from the sideline. I don’t know.”

Meninga attended the same Fox Sports launch at Bankwest Stadium and was surprised by a report he closed the door on Smith. Meninga said it was quite the opposite – it was just a matter of actually tracking him down. The new rules tipped to speed up the game would help Smith, said Meninga, and he would need limited training to be match fit.

Meanwhile, Cronk tipped the Storm and Roosters to fight it out for the title, along with South Sydney. But he believes 2020 runners-up Penrith “will finish fifth or sixth and be a great team”.

Cronk said so many of the Panthers had career-best seasons, which would be hard to replicate at such a young age.

“Most of them are young, and if they had their best seasons and they’re 30 with 250 games under their belt, they know how to get that job done again,” Cronk said.

“Teams will come after them and they’ll have to learn on the run.”