An Adelaide Crows’ board director has quit in protest of what he has described as the AFL’s “coercive and forceful” vaccination policy, amid claims it contributed to a player being diagnosed with a serious heart condition.

Nick Takos, elected to the board this year with a background in leadership, culture and governance, said on Wednesday he was standing down as a result of the AFL’s double vaccination policy and the manner in which the Crows had responded. He said his personal request for a medical exemption had been denied. 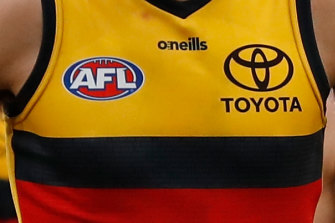 An Adelaide board member has stood down over the AFL’s vaccination mandate.Credit:Getty Images

Australia’s medicine regulator, the Therapeutic Goods Administration, has approved various vaccinations as safe and effective against COVID-19, with children aged 5-11 the most recent group to gain vaccination approval. More than 87 per cent of eligible Australians are double vaccinated (92 per cent have had one dose), helping to guard against infection. Vaccination is a key plank in the federal and state governments’ plans to avoid further lockdowns.

“The AFL’s COVID mandate, and the club’s deeply concerning response to it, has left me with no choice but to step down. I am passionate about the Crows and I have invested 21 years of service in one form or another to the club. I understand the challenging position that the board is in,” Takos said in a statement.

“That said, I have made my position to the board clear that while I am not anti-vaccination generally, corporations should not tell their staff and footy fans what medical treatment is good for them through a mandatory vaccination policy.”

Takos said he had called a special board meeting to discuss the health and safety of players after it was reported by Seven in Adelaide that a Crows’ SANFL player had been diagnosed with pericarditis, a serious heart condition, as a result of being vaccinated. Pericarditis is an inflammation of the lining around the heart and is a known but rare side-effect of vaccination.

“I have been increasingly concerned following news that one of Adelaide’s SANFL players has been diagnosed with pericarditis, a serious heart condition, as a result of taking the COVID vaccination at the direction of the AFL and club,” Takos said.

“It was clear the board was immovable on this issue and key, reasonable questions are yet to be answered including; What guidance or direction the AFL has provided the club following notification of the vaccination injury; What steps the club has taken to review its vaccination policy in light of the incident and any similar events; Potential consequences of such incidents on insurances against liability under contracts with players and staff; Whether the known risks of COVID-19 vaccines were considered when the vaccination policy was adopted and, given the player’s injury, proposing that the mandatory policy be reviewed as soon as possible.

“I cannot support a coercive and forceful policy that does not consider the proportionate risk to players and staff.”

The AFL and Adelaide have been contacted for comment.

Takos’ stance follows the decision by Crows’ AFLW player Deni Varnhagen to stand down because she decided against vaccination. St Kilda’s Georgia Patrikios is unvaccinated but says she is “committed” to educating herself further before making a final call on whether to get the COVID-19 jab, while Carlton’s Liam Jones has retired, having refused to be vaccinated.

“The AFL has chosen to enforce its edict. The only option available was to fall into line at the expense of my personal (private) medical circumstances, including my unique health conditions which have been deemed significant by my specialists, and supported by my cardiologist in a request to the club for a medical exemption (which has been denied),” Takos said.

Kevin Sinfield: Director of rugby to leave Leeds Rhinos at end of season